John Williams To Leave WGN To Concentrate On WCCO 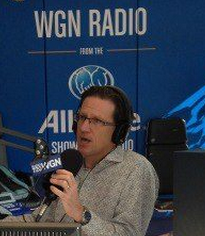 WGN Radio Tuesday announced that midday host John Williams has made the decision to leave the station at the end of the year. Williams will be moving to Minneapolis where he will continue hosting afternoons at WCCO-AM, a show he has done remotely from WGN since 2010.

"John is a great broadcaster and has been a valued member of the WGN Radio family," said Bill White, WGN Radio’s program director. "While we are sad to see him go, we are happy for John and his family that they are able to return to Minneapolis, where they lived before moving to Chicago. We wish him all the best and know that he will continue to shine in his role at WCCO."

Williams said in a note released to WGN staff this afternoon: "After a great deal of thought, after the 1st of January, Brenda and I have decided to move to Minneapolis and my time here will come to an end. I decided some time ago to do just one show -- as well as I can -- and that one will be at WCCO.  Both stations and staffs deserve as much." Williams continued: "We've had a lot of Bright Sides here. I never got to be King, but you’ve always made me feel like royalty."
Posted 3:12:00 AM