The AM Rundown: Trump Tweets 'He Won' About Biden 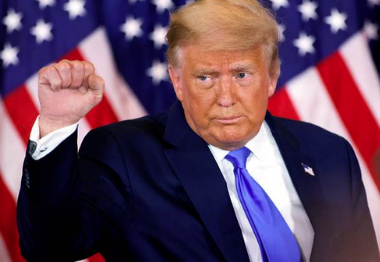 THEN SAYS NOT CONCEDING: President Trump said "He won" of President-elect Joe Biden in a tweet yesterday that made a baseless claim of a, quote, "rigged" election, leading observers to believe he was ready to acknowledge Biden's victory and begin working with the president-elect's team on the transition. But then when he saw how the tweet was being interpreted, Trump quickly followed it up with another tweet saying he wasn't conceding, making the unfounded "rigged" claim again and declaring, "I concede NOTHING!"

I WON THE ELECTION!

Trump’s campaign has being mounting legal challenges to the election results in several states, but they haven't been successful, and in any case, none has included evidence that would reverse the outcome. A lawsuit against the vote count in Pennsylvania filed by his team Sunday dropped a central part of the claim it had been making to try to stop the certification of the election results in the state that Biden won, with his margin of victory up to one percent as of last night.

➤U.S. PASSES 11 MILLION CORONAVIRUS CASES, NEW RESTRICTIONS IN MICHIGAN AND WASHINGTON: The U.S. passed 11 million confirmed coronavirus cases on Sunday, less than a week after passing 10 million cases, as the nationwide surge of the virus continues. Michigan and Washington became the latest states to institute new restrictions amid the surge. Michigan Governor Gretchen Whitmer ordered high schools and colleges to stop in-person classes, restaurants to close to indoor dining, and organized sports other than pro sports suspended, amid other mandates set to last for three weeks. Washington Governor Jay Inslee announced new restrictions for the next month, including closing indoor services at gyms and some entertainment centers, limiting capacity at stores, limiting restaurants and bars to outdoor dining and to-go service, and banning multiple-household, indoor social gatherings unless attendees quarantine for 14 days or test negative for the coronavirus and quarantine for a week.
There have been more than 246,200 deaths in the U.S. as of early this morning, according to Johns Hopkins University's count.
➤MACY’S THANKSGIVING DAY PARADE WILL GO ON WITH NO AUDIENCE DUE TO COVID-19  The pandemic has now taken away spectators for the Macy’s Thanksgiving Day Parade. The New York Times reports the parade will still feature star-studded theatrical and musical performances and floats, but there will be no crowds of onlookers allowed due to the COVID-19 pandemic. The floats and performers will travel just one city block down 34th street—as opposed to their usual two-and-a-half-mile route that starts at West 77th Street—and the streets surrounding the parade route will be closed off, even during the planning stages, to prevent onlookers from lingering. Another change: this year the giant balloons will be pulled along by utility vehicles, when usually they’re held by uniformed handlers. Usually the parade has 8,000 to 10,000 people involved in its production, but this year that number’s been cut down to about 1,500. Pre-filmed Broadway production clips, as well as a performance by the Radio City Rockette will be broadcast during the show. The only way to watch the parade this year is via your TV. 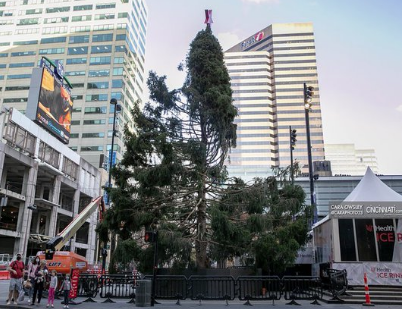 ➤‘PATHETIC’ TREE ERECTED OUTSIDE MACY’S IN CINCINNATI DESCRIBED AS THE ULTIMATE SYMBOL OF HOLIDAYS AMID THE PANDEMIC A sad Christmas tree that’s been put up outside of a Macy’s in Cincinnati, Ohio has a lot of people talking. Photos of the “pathetic” and “sparce” Spruce were shared on social media recently, and dozens of people expressed that it perfectly symbolizes 2020. Cincinnati Enquirer photojournalist Cara Owsley tweeted about the tree, writing, “Not sure what happened to the Christmas tree at Fountain Square, but it’s the most #Christmas2020 tree ever.” She also shared a photo of the tree, which has an exposed trunk and thin, drooping branches. Her tweet got a bunch of funny replies, with one person writing, “The downtown Cincinnati Christmas tree could not be more on brand for 2020 if it tried,” and another quipping, “It’s got the coronavirus!” 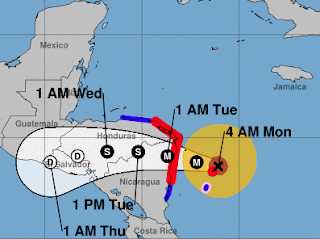 ➤NICARAGUA, HONDURAS SET TO BE HIT AGAIN BY POWERFUL HURRICANE, WITH IOTA HEADING IN: Hurricane Iota rapidly gained strength on Sunday to become a Category 2 storm, with forecasters saying it was on track to hit around the border between Nicaragua and Honduras late today as a powerful Category 4 storm, just under two weeks after Hurricane Eta made landfall in the same region, also as a Category 4. Officials warned that the risk of flooding and landslides was high because Iota would likely come on shore over areas where the ground was saturated with water from Eta, which killed at least 120 people in Central America and Mexico. Iota is the 30th named storm of this year's record-breaking Atlantic hurricane season.

➤MORE THAN 82,000 SEX ABUSE CLAIMS AGAINST THE BOYS SCOUTS: More than 82,000 people have come forward to file sex abuse claims against the Boy Scouts that are alleged to have taken place over decades, making their claims ahead of today's deadline, which was established by a bankruptcy court, the New York Times reported Sunday. Attorneys said that was far more than the number of abuse accusations that have been made against the Catholic Church. A coalition of attorneys operating under the name Abused in Scouting has claims from all 50 states from people ranging in age from eight to 93, the vast majority of them male accusers. The Boy Scouts are seeking to reorganize and set up a victims' compensation fund under the Chapter 11 bankruptcy filing. The Boy Scouts of America said in a statement that they were, quote, "devastated by the number of lives impacted by past abuse in Scouting," stating, "We are deeply sorry." 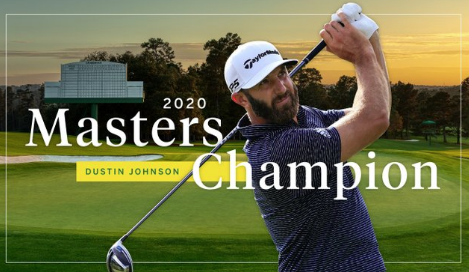 🏌JOHNSON WINS THE MASTERS: American Dustin Johnson won the Masters Tournament on Sunday, getting the victory by five strokes with the lowest score in tournament history, in a Masters at Augusta National that was played without spectators and delayed by months due to the pandemic. The world's Number 1 player finished at 20-under 268, breaking the record held by both Tiger Woods and Jordan Spieth by two shots.

The big shots, the main takeaways and more from Dustin Johnson’s win at the 84th Masters.@nickpia @golf_com | #themastershttps://t.co/6wkwhhmUj1

His five-shot victory over Australia's Cameron Smith and Sungjae Im of South Korea tied in second place was the largest at the Masters since Woods won by 12 in 1997. The Masters is Johnson's second major, after he won the U.S. Open in 2016.

🏈HOPKINS MAKES SPECTACULAR CATCH IN FINAL SECONDS TO GIVE CARDINALS THE WIN: Arizona Cardinals wide receiver DeAndre Hopkins made a spectacular catch in the end zone at the end of the game yesterday (November 15th) to give his team a 32-30 win over the stunned Buffalo Bills. Arizona quarterback Kyler Murray threw the 43-yard desperation pass with two seconds left to Hopkins, who went up surrounded by three Bills defenders and came down with the ball.


🏈NFL SCORES -- WEEK 10:
Tonight's Monday Night Football game on ESPN:
🏈SAINTS COULD FACE 'SIGNIFICANT DISCIPLINE' OVER MASKLESS LOCKER ROOM CELEBRATION: The New Orleans Saints could be facing, quote, "significant discipline" over a maskless locker room celebration following their 38-3 rout of the Tampa Bay Buccaneers last week, ESPN reported Sunday. Several Saints players posted videos of the players dancing and celebrating, violating the NFL's requirement that all players, coaches and staff wear masks in the locker room. ESPN reported that the Saints' punishment is expected to be significant because they've already been fined once, after head coach Sean Payton didn't wear his face mask properly on the sidelines during Week 2.

Los Angeles Dodgers legend Tommy Lasorda is in the hospital. According to TMZ, the 93-year-old was put on a ventilator last week due to heart issues. The report also says Lasorda's hospitalization has nothing to do with the coronavirus.

⚾LASORDA HOSPITALIZED IN INTENSIVE CARE: Hall of Fame MLB manager Tom Lasorda is hospitalized in intensive care, with the Los Angeles Dodgers yesterday describing their 93-year-old former manager as resting comfortably. TMZ reported that the hospitalization is not related to the coronavirus. Lasorda, who managed the Dodgers from 1976-1996, including two World Series championships, was at the team's Game 6 victory over the Tampa Bay Rays on October 27th, when they won their first World Series since 1988. Lasorda has had two heart attacks, one in 1996 and another in 2012.

🏈ARIZONA STATE-COLORADO GAME CANCELED DUE TO CORONAVIRUS: The Pac-12 announced Sunday that next Saturday's football game between Arizona State and Colorado had been canceled due to Arizona State not having enough scholarship players available to meet the 53-player minimum because of positive coronavirus tests. This is the second straight game Arizona State is missing for that reason, after their game this past Saturday against California was canceled. There were 15 major college football games called off last week due to the virus, the most of any week so far.
Posted 4:22:00 AM