Report: Private-Equity Firm May Be Interested In Newsmax TV

For nearly two years, allies of President Trump have been exploring ways to build up a formidable competitor to Fox News. One target they recently zeroed in on: the fledgling pro-Trump cable channel Newsmax TV, reports The Wall Street Journal.

Hicks Equity Partners, a private-equity firm with ties to a co-chair of the Republican National Committee, has held talks in recent months about acquiring and investing in Newsmax, according to people familiar with the matter, part of a larger effort that could also include a streaming-video service.

Newsmax’s viewership has risen sharply since Election Day, as it wins over viewers loyal to Mr. Trump who are frustrated that Fox News and other networks have declared Democrat Joe Biden the president-elect. Newsmax hosts have promoted Mr. Trump’s claims that the election was stolen. No evidence of significant fraud has emerged or been presented.

It is unclear whether Hicks Equity’s talks with Newsmax will move forward. The discussions show the belief among some investors and allies of Mr. Trump that there is room to mount a real challenge to Fox News, which has dominated the conservative media landscape for two decades.

Trump and Fox News have had a complicated relationship. The network’s opinion hosts are highly supportive of the president. He devours Fox content, tweets about it and is influenced by it in policy and personnel decisions, aides say. Yet he spars with the network when he feels it is criticizing or undermining him.

The election’s aftermath has stoked those tensions: Trump has criticized Fox News on Twitter while promoting segments on the network favorable to him and heaping praise on Newsmax and One America News Network, another small right-wing channel. 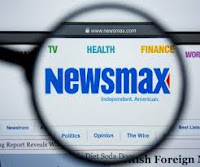 Creating a television network to rival Fox News, which has led the cable-news ratings for years, is a longshot, according to WSJ.  Newsmax’s average prime-time audience jumped 156% to 223,000 viewers during the week of the election, according to Nielsen data, and last Thursday crossed one million from 7 p.m. to 8 p.m., about half of Fox’s audience during the time period. Sustaining those gains when interest in the election subsides won’t be easy. Fox averaged nearly six million prime-time viewers during the week of the election, about 22% higher than the previous four weeks.

Meanwhile, Variety reports the top executive of the news outlet said the company intends to move forward on its own, and noted Newsmax has little desire to turn the network, which has seen its ratings pop since the presidential election, into a TV outlet focused largely on a forum for a post-White House Donald Trump.

“Newsmax would never become ‘Trump TV,'” Christopher Ruddy, the CEO of Newsmax, told Variety in an interview Sunday evening. “We have always seen ourselves as an independent news agency, and we want to continue with that mission. But we are open — [Trump] is going to be a political and media force after he leaves the White House, and we would be open to talking to him about a weekly show.” The executive also said “we are not actively selling” the company at this time, though he notes he has had expressions of interest from “investors, investment banks and strategic players” in the recent past.