Tucker Carlson Assures Viewers He Is NOT Exiting FOX 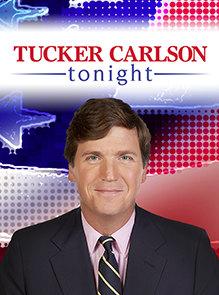 Fox News host Tucker Carlson on Monday assured viewers he was not leaving the network as rumors had suggested on social media sites over the past few days, reports The Hill.

"Over the weekend, we got a lot of calls asking if we're leaving Fox News," Carlson said. "This show is not going anywhere. It's getting bigger."

The Hill reports Carlson was likely referencing a fake social media post circulating on Parler, a new platform which conservatives have flocked to, that alleged he was leaving the network for Newsmax. The post also circulated briefly on Facebook.

Carlson said Fox News executives are looking to "expand the amount of reporting and analysis we do in this hour across other parts of the company."

"The people who run Fox News want more of it, not less," he said on Monday. "And we are grateful for that."

Tucker Carlson: 'This show is not going anywhere, it's getting bigger' https://t.co/6DuU3SQwbG

Carlson has one of the highest-rated cable news programs in the country, often stirring controversy for blistering attacks on the national media, prominent Democrats or political "elites" in society.