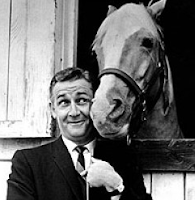 He moved to Vancouver at 6, and had his own CBC Radio show by the age of 17.   He got a big break when he was hired as the 1944 summer replacement for Eddie Cantor’s NBC radio show.

He hit the big time in TV as co-star to the talking horse on the Mr. Ed series. He also has done voices for many cartoon characters, notably Scrooge McDuck. Happy 96th Birthday, Mr. Young!

King got his first job in radio in 1957, when the manager of a small station, WAHR (now WMBM 1490 AM) in Miami Beach, hired him to clean up and perform miscellaneous tasks. When one of their announcers quit, they put King on the air. His first broadcast was on May 1, 1957, when he worked as the disc jockey from 9 a.m. to noon. He also did two afternoon newscasts and a sportscast. He was paid $55 a week.

He acquired the name Larry King when the general manager Marshall Simmonds said that his real last name Zeiger was too ethnic and difficult to remember, so Larry chose the surname King, which he got from an ad in The Miami Herald for King's Wholesale Liquor, minutes before air.

He started doing interviews on a mid-morning show for WIOD 610 AM, at Pumpernik's Restaurant in Miami Beach.  He would interview anyone who walked in. His first interview was with a waiter at the restaurant. Two days later, singer Bobby Darin, in Miami for a concert later that day, walked into Pumpernik's as a result of coming across King's show on his radio; Darin became King's first celebrity interview guest.

His Miami radio show launched him to local stardom. A few years later, in May 1960, he hosted Miami Undercover, airing Sunday nights at 11:30 p.m. on WPST-TV Channel 10 (now WPLG). On the show, he moderated debates on important issues of the time.

King credits his success on local television to the assistance of comedian Jackie Gleason, whose national TV variety show was being taped in Miami Beach during this period. "That show really took off because Gleason came to Miami," King said in a 1996 interview he gave when inducted into the Broadcasters' Hall of Fame. "He did that show and stayed all night with me. We stayed till five in the morning. He didn't like the set, so we broke into the general manager's office and changed the set. Gleason changed the set, he changed the lighting, and he became like a mentor of mine."

In 1978, King went national, inheriting the nightly talk show slot on the Mutual Broadcasting System, broadcast coast-to-coast, that had been "Long John" Nebel's until his death, and had been pioneered by Herb Jepko. King's Mutual show developed a devoted audience. 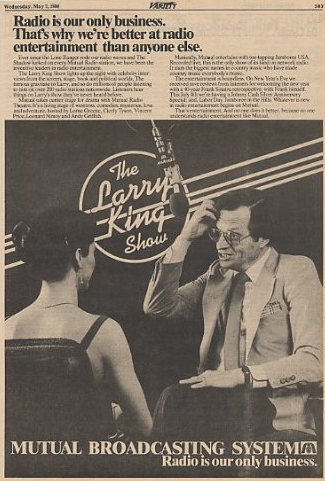 It was aired live Monday through Friday from midnight to 5:30 a.m. Eastern Time. King would interview a guest for the first 90 minutes, with callers asking questions that continued the interview for another 90 minutes. At 3 a.m., he would allow callers to discuss any topic they pleased with him, until the end of the program, when he expressed his own political opinions. That segment was called Open Phone America.

The show was successful, starting with relatively few affiliates and eventually growing to more than 500. It ran until 1994.

For its final year, the show was moved to afternoons. The afternoon show was eventually given to David Brenner and radio affiliates were given the option of carrying the audio of King's new CNN evening television program. The Westwood One radio simulcast of the CNN show continued until December 31, 2009.

Earlier in the year, Texas Instruments was looking for an established radio manufacturer to develop and market a radio using their transistors. No major radio maker, including RCA, Philco, and Emerson, was interested. The President of I.D.E.A. at the time, Ed Tudor, jumped at the opportunity to manufacture the TR-1, predicting sales of the transistor radios would be "20 million radios in three years.

One year after the TR-1 release, sales approached 100,000 units. The look and size of the TR-1 were well received, but reviews of its performance were typically adverse.

The Regency TR-1 circuitry was refined from the Texas Instruments drawings, reducing the number of parts, including two expensive transistors. Though this severely reduced the audio output volume, it let I.D.E.A. sell the radio for only a small profit. The initial TR-1 retail price was $49.95 (roughly $443 in year-2016 dollars) and it sold about 150,000 units.

The TR-1 uses Texas Instruments' NPN transistors, hand-picked in sets of four. A 22.5 volt battery provided power. The current drain from this battery allowed 20 to 30 hours of operation.

While the radio was praised for novelty and small size, the sensitivity and sound quality were behind the tube-based competitors. A review in Consumer Reports mentions the high level of noise and instability on certain radio frequencies, recommending against the purchase.

➦In 1957…The local chapter of the Elvis Presley fan club picketed radio station WCFL 1000 AM (now Sports WMVP) after it banned Presley's records (before the station flipped to Top 40). The station didn’t overturn its no-Elvis policy until almost a decade later.

➦In 1971…Sportscaster Bill Stern died at age 64 (Born - July 1, 1907). In 1984, Stern was part of the American Sportscasters Association Hall of Fame's inaugural class which included sportscasting legends Red Barber, Don Dunphy, Ted Husing and Graham McNamee. He was inducted into the National Radio Hall of Fame (1988) and has a star in the Hollywood Walk of Fame.

Bill Stern's Sports newsreel was a show about the way Bill Stern broadcast baseball games from 1937 to 1956. Stern made famous the dramatic pause, the over emotional call and exaggerated words.

Stern began doing radio play-by-play commentary in 1925, when he was hired by a Rochester station, WHAM, to cover football games. Shortly after that, he enrolled at Pennsylvania Military College, graduating in 1930.

NBC hired him in 1937 to host The Colgate Sports Newsreel as well as Friday night boxing on radio. Stern was also one of the first TV boxing commentators.

According to the book Sports on New York Radio by sportscaster and Westwood One executive David J. Halberstam, Stern's remarkable career flourished despite a physical handicap. In 1935, on his way home from a football game in Texas, the car Stern was in got into an accident, injuring him severely enough that his left leg had to be amputated just above the knee.

Some observers consider Stern's style a blueprint in the 1940s for the style of Paul Harvey, ABC Entertainment Network commentator, who adapted both Stern's newscasting (transforming his Reel One to 'Page One') and his stories about the famous and odd (to Rest Of The Story), although Stern made no effort to authenticate his stories and, in later years, introduced that segment of his show by saying that they "might be actual, may be mythical, but definitely interesting."  Harvey, on the other hand, said he told only stories he had authenticated in some way.

After many years with NBC he switched to ABC, where he lasted until 1956. After retiring from television broadcasting, Stern did radio sports reports and commentaries for the Mutual Broadcasting System in the late 1950s and 1960s.