An election audit and hand recount of the presidential election vote in Georgia has been completed, and the state's Republican secretary of state says there's "not a thimble full of difference" in the totals from the original vote count. Investigative reporter Justin Gray of Channel 2 in Atlanta asked Secretary of State Brad Raffensperger yesterday if anyone has presented any evidence to him of major fraud in the voting. "No," he replied. "We have not seen any evidence they have given us, anything that supports. It just doesn't show up, just doesn't work out. The numbers aren't there."

Raffensperger said he expects the state to certify the election for President-elect Joe Biden today. The Democrat won Georgia's 16 electoral votes with a 49.5% vote compared with President Donald Trump's 49.2%. After the audit report, the Associated Press finally called the Georgia race for Biden, 16 days after Election Day. 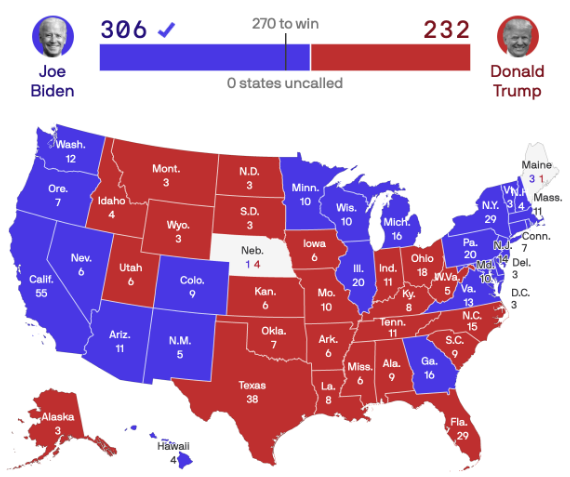 About that thimble-full: In the official election results, former Vice President Biden received 2,475,264 votes to President Trump's 2,462,741, a win for Biden of 12,582 votes. In the recount, Biden's count fell by 298 votes.
Meanwhile, judges in Arizona, Pennsylvania and Georgia all dismissed election-related lawsuits filed by Republicans and the Trump campaign to challenge vote totals in those states. All three lawsuits were attempts to delay or block state certification of vote totals.
Michigan's top Republican state legislators have been summoned to the White House today to talk with President Trump, CNN reports. The president is pressuring state officials to block or delay certification of the state's vote, scheduled for next week. Biden won Michigan's 16 electoral votes by a margin of 154,187 votes.


➤WHITE HOUSE ACKNOWLEDGES COVID SURGE: In its first public briefing since July, the White House Coronavirus Task Force yesterday acknowledged that cases of coronavirus are now rising more rapidly than ever in the U.S. More than 170,000 new cases of the virus were reported on Wednesday, and more than 79,000 people have been hospitalized for treatment. Dr. Anthony Fauci stressed that Americans should continue to take basic precautions, such as wearing masks in public, until a vaccine becomes widely available. President Trump did not appear at the briefing, and no questions from the media were allowed.

The CDC said it recommends Americans do not travel during the Thanksgiving holiday next week to mitigate the spread of COVID-19 as cases spike around the country https://t.co/VP42Ej5Qo8

The Centers for Disease Control issued a plea to Americans to avoid traveling over the Thanksgiving weekend and celebrate the holiday with immediate family.
➤APPLE SETTLES 'BATTERYGATE' SUIT: Apple has agreed to pay a total $113 million to 34 states to settle a lawsuit accusing it of deliberately slowing down the performance of older iPhones without telling its customers what it was doing and why. The company said it was trying to fix.

Back to business and back to the top of the NFC West.#GoHawks x @Q13FOX

🏀WARRIORS' CLAY THOMPSON IS OUT FOR THE SEASON: The Golden State Warriors' star guard Klay Thompson is out for the entire season (again) after suffering a torn Achilles tendon during a scrimmage on Wednesday. This will be the second straight season the five-time All-Star has missed due to injuries.
🏈15 COLLEGE GAMES ARE OFF FOR NCAA WEEK 12: The Maryland Terrapins game against the Michigan State Spartans, scheduled for tomorrow, has been canceled because a total of 15 players and seven staff members have now tested positive for the coronavirus. It's the second week in a row the team has had to cancel. That makes 15 games for Week 12 that have been postponed or canceled outright.

CHECK IT OUT: Here's the full list of Week 12 cancellations and postponements.

🏈FOUR EAGLES ON THE RESERVE LIST: The Philadelphia Eagles have placed four players on the COVID-19 reserve list after a player tested positive. The sidelined players include wide receiver J.J. Arcega-Whiteside, running back Corey Clement, defensive end Vinny Curry and practice squad wide receiver Deontay Burnett. The NFL just this week announced new tougher protocols for the rest of the season in an effort to halt the spread of coronavirus among players and staff.

🥊McGREGOR-POIRIER REMATCH IS ON: Connor McGregor has signed a deal for a rematch against Dustin Poirier on January 23rd, UFC president Dana White told Yahoo Sports. McGregor, the former UFC lightweight and featherweight champion, had "retired" in January of this year after defeating Donald Cerrone. The last McGregor-Poirier match was in 2014. McGregor won then with a first-round TKO.

🏌LEXI THOMPSON SHOWS OFF: Lexi Thompson made her fifth career hole-in-one on the LPGA in the first round of the Pelican Women's Championship yesterday in Belleair, Florida. Thompson holed a 9-iron from 162 yards on the par-3 hole, her 12th of the day.
Posted 4:22:00 AM