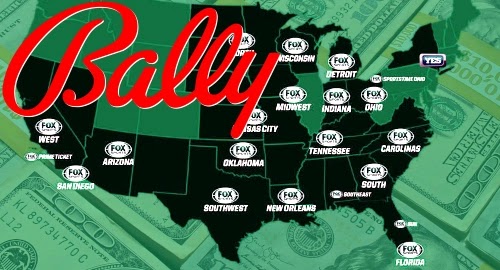 Sinclair Broadcast Group and casino operator Bally’s Corp. are teaming up to bet big on sports gambling, The NY Post is reporting.  The two companies reportedly just signed a deal for Sinclair to rename its 21 sports networks Bally Sports.

Bally’s, which owns Bally’s Atlantic City Hotel & Casino, will pay Sinclair $85 million over a 10-year period for the naming rights, giving it exclusive access to fans of 42 major teams, including the Arizona Diamondbacks, the Detroit Tigers, the Tampa Bay Rays and the Kansas City Royals, sources said.

The goal, sources said, is for viewers to eventually be able to bet on games using a Bally’s online gaming tool directly from their TVs.

Sinclair’s channels are currently named after Fox Sports because it bought them last year to help clear Disney’s purchase of 21st Century Fox.

The broadcast company will also get a 15 percent stake in the Nasdaq-listed Bally’s and will have the right to up its stake by another 15 percent if it hits certain financial targets, sources said.

Separately, Bally’s is buying sports-betting software company Bet.Works for roughly $100 million and will attempt to drive traffic to its site through Sinclair, sources said.

The casino company, controlled by Soo Kim’s Standard General hedge fund, can launch the new online gaming tool in the states where sports betting is legal, including Nevada, Louisiana, Colorado and New Jersey, if it also has a physical casino there.

MBL, the NBA and NHL still need to sign off on whether Bally’s can sponsor broadcasts to advertise their sports betting tools, sources said.

For Sinclair, a sports-betting partnership could help drive up views at a time when its investment in local sports networks has been sagging. Sinclair bought the Fox channels from Disney in August 2019 for $9.6 billion only to write down their value earlier this month by $4.23 billion, or nearly half.