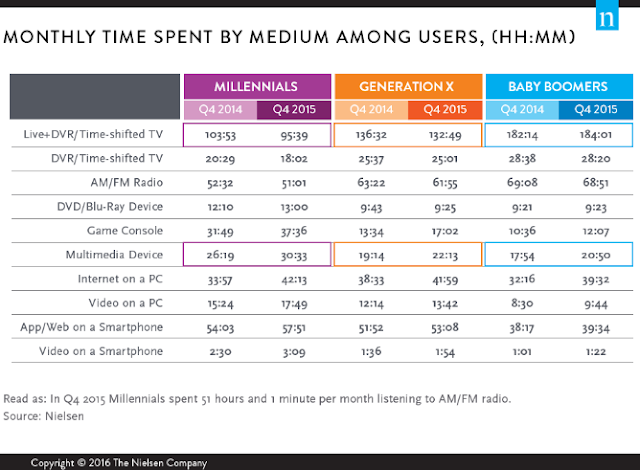 According to a Nielsen Generational Snapshot study, which looked at media usage and device penetration of Millennials (18-34), Generation X (35-49) and Baby Boomers (50-67), distinct differences—as well as a few notable similarities—exist when it comes to connecting with content.

While time spent on traditional television has decreased across most generations over the past several years, device fragmentation has led to more content options, and consumers are taking full advantage of them—regardless of age. For example, tablet penetration among all generations analyzed has increased 9% from 2014 to 2015. At 70%, Generation X leads the way in terms of national tablet penetration.

Multimedia devices (such as Roku, Apple TV and Google Chromecast) have also made their mark on a wide swath of consumers. These relatively inexpensive options extend viewing choices, and consumers continue to spend time with them. In fact, according to the study, monthly time spent using multimedia devices has increased across all of the generations. What’s more, while Millennials spend the most time on these devices, Baby Boomers show an increase year over year in time spent on multimedia devices by two hours and 56 minutes in fourth-quarter 2015.

Perhaps no other form of entertainment is as different, and in many cases as polarizing, throughout the generations as music. From big band to rock and roll to hip-hop to electronic, music preference is often generational. The Nielsen study looked at the music formats and found that both Millennial and Generation X listeners prefer to tune into the modern classics of Pop Contemporary Hits, with weekly total audiences of 27.5 million and 19.3 million listeners, respectively. And regardless of the disparity with regard to the weekly cume numbers, both of these groups spend more than three hours 15 minutes tuning in to this format.

Baby Boomers, on the other hand, prefer the Adult Contemporary/Soft Adult Contemporary genre, spending more than four hours weekly listening to the smooth sounds. That group is also more disposed to listen to the News/Talk format, with about 15.7 million listeners tuning in for an average of six hours 45 minutes weekly. This compares to three hours 45 minutes for Millennials and five hours for Gen X.
Posted 4:15:00 AM