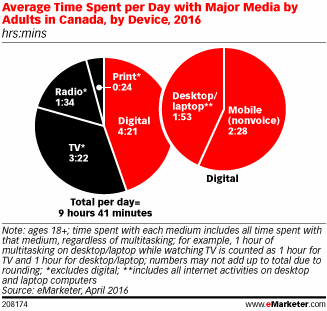 eMarketer estimates that adults in Canada will spend an average of 9 hours 41 minutes a day using media in 2016, nearly 2.5 fewer hours per day than the average US adult, according to eMarketer’s latest forecast on time spent with media. Mobile is driving the gains in Canada, but the growth rate is slowing.

Time spent with digital media—including both PC and nonvoice mobile usage—now tops TV by nearly an hour a day, and the gap continues to widen. Mobile time exceeds desktop and laptop time by more than half an hour a day.

Gains in time spent on mobile among the total adult population have been partly the result of wider adoption of tablets and smartphones. Also, those who already used mobile devices are spending more time with them than ever. Smartphone users will spend nearly an hour more with their devices 2016 than they did in 2012, as more and more mobile content became available and usage became more and more a part of the daily routine. The pattern for tablet users is similar. 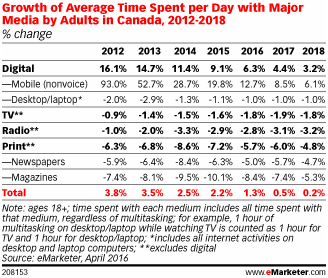 Traditional media in Canada still garners more than half of adults’ time spent with media. TV, print and radio will account for a collective 55.0% of daily media time in 2016. By 2018, traditional media’s share will slide to 51.9%.
Posted 4:13:00 AM