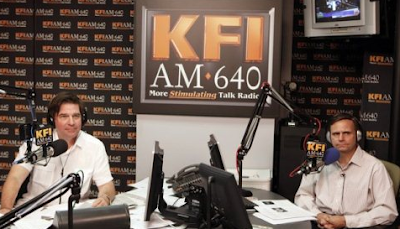 Democrat Bernie Sanders got into a heated back-and-forth with  "John and Ken" show on KFI 640 AM Thursday when they questioned him about his public service.

Sanders called out the hosts for interrupting him several times before abruptly ending the interview.

The interview, first reported by Buzzfeed, began with one of the hosts quizzing Sanders on his experience with creating jobs.

"I'm not really clear on what kind of jobs you've had, besides Senator," the host said.

According to The Hill, Sanders responded that he served in the House and was mayor of Burlington, Vt., for eight years.

"Yeah, but have you ever not been paid by taxpayers?" the host asked.

"All right, look, if you don’t like government, my friend, that’s fine. I’m proud of the record I’ve established as a mayor, making Burlington, Vermont, one of the more beautiful small cities in America, proud of my record in the House, proud of my record in the United States Senate. You don’t like government? That’s your point of view. I am proud of what I have accomplished," Sanders responded in the interview.