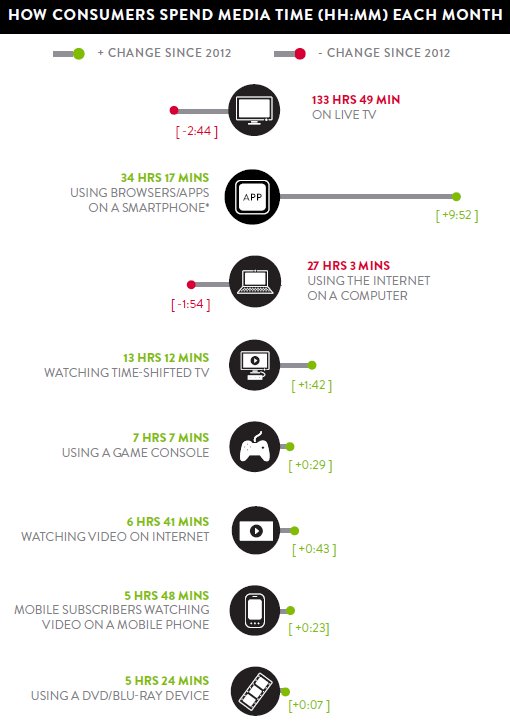 The number of digital devices and platforms available to today’s consumers has exploded in recent years. As a result, Nielsen reports today’s consumer is more connected than ever, with more access to and deeper engagement with content and brands. And these changes are contributing to the media revolution and blurring traditional media definitions.

Americans now own four digital devices on average, and the average U.S. consumer spends 60 hours a week consuming content across devices. And a majority of U.S. households now own high-definition televisions (HDTVs), Internet-connected computers and smartphones. In addition to more devices, consumers also have more choices for how and when they access content.

As a result, consumption habits are changing. According to Nielsen, the rapid adoption of a second screen has transformed the traditional TV viewing experience, with consumers using smartphones and tablets in ways that are natural extensions of the programming they watch. And social media usage is now standard practice in our daily lives—almost half (47%) of smartphone owners visit social networks every day.

It has never been a more important time to know how consumers are behaving than in today’s fast evolving digital environment. These trends in digital technology are propelling consumers’ new multiscreen, constantly connected lifestyles.