Deborah Parenti, Executive Vice President-Radio of Streamline Publishing, Inc. has announced the return of RadioDiscussions.com and online community site for the radio and television industry, according to RadioInk.

Additionally she announced that Charles Bosworth (aka Charlie Profit), as the new General Manager and Chief Moderator of the site, which previously had hundreds of thousands of unique monthly visitors. 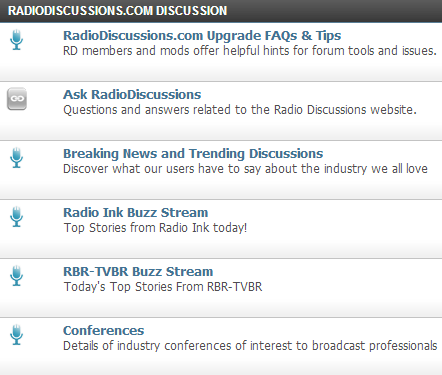 RadioDiscussions was originally called Radio-Info.com and was founded by Doug Fleming in 1998 and was continued by his family for several years following his death, until they sold the RadioInfo news site to publisher Michael Harrison. The Flemings kept the original foundation of the business Doug Fleming had founded and renamed it RadioDiscussions.com. In spring of 2013 they sold the site to Streamline Digital, Inc. a wholly owned subsidiary of Streamline Publishing, Inc.

"Since the site went away we've learned how passionate radio people were about it and how much they missed it. I made it my mission to bring it back and integrate it back into the community of people who love this industry. It also broadens our offering to advertisers because of the different audience profile from our other publications. Plus Boz' (Charles Bosworth) is not only passionate about radio, he has a deep understanding of the technology and the importance of online communities. He was one of the original moderators when Doug Fleming was running the site. We think he will make it very successful."

The 43-year-old Bosworth said, "There is nothing more fun than discussing radio with radio pros and enthusiasts. Radio Discussions will continue to be the premier site for talking shop about radio and I'm looking forward to being a part of it again. What can our users expect? Some things will be the same, such as the general functionality, but there are many improvements as well. We are adding more boards and some premium features that power users will enjoy. We want you to have a Radio Discussions tab open on your browser all day to socialize and network with other radio pros. It is my mission to make Radio Discussions be the radio convention that never ends."

According to Streamline Chairman/CEO B. Eric Rhoads, I'm reminded of Classic Coke and consumers who were clamoring to bring it back. RadioDiscussions had become the center of activity and chatter in the radio industry among those passionate about radio. I'm thankful Deborah had a vision for its return."
Posted 5:19:00 AM