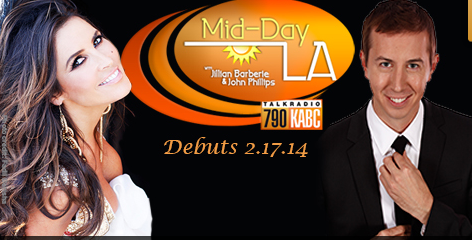 Barberie is well known to Southern California for her 18 years as co-host of Fox 11’s top-rated morning show, Good Day LA, where she engaged audiences with her real-life stories and electric energy. The sassy, Canadian-born Barberie has made a career out of hanging with the guys. While hosting Good Day LA, she also spent a decade on the Fox NFL Pre-Game Show working opposite Curt Menefee, Howie Long and Terry Bradshaw.

"I am so excited to be partnered with John Phillips! I couldn't be happier to be a part of the KABC team, which is such a great place with incredibly talented people. I've always felt that there is something unique and liberating about doing radio,” Barberie said.

“Jillian is not only a high-energy broadcasting star, she’s a real-life mom and trend-setter – and has an opinion on everything! We are going to give the listeners a reason to take a long lunch everyday. It's going to be a blast,” Phillips said.

Phillips began his radio career as the youngest major-market radio talk show host in the country. He is also a columnist for The Orange County Register and makes weekly appearances on Fox 11 Good Day LA as a political analyst, in addition to regular appearances on cable news.