On March 22, 1922, the Crosley Broadcasting Corporation began broadcasting with the call sign WLW and 50 watts of power. Crosley was a fanatic about the new broadcasting technology, and continually increased his station's capability. The power went up to 500 watts in September 1922, 1000 watts in May 1924, and in January 1925 WLW was the first broadcasting station at the 5000 watt level. On October 4, 1928, the station increased its power to 50 kilowatts.  Again it was the first station at this power level, which still is the maximum power currently allowed for any AM station in the United States.

At 50 kilowatts, WLW was heard easily over a wide area, from New York to Florida. But Crosley still wasn't satisfied. In 1933 he obtained a construction permit from the Federal Radio Commission for a 500 kilowatt superstation, and he spent some $500,000 ($9.02 million in 2014) building the transmitter and antenna.

In January 1934 WLW began broadcasting at the 500 kilowatt level late at night under the experimental callsign W8XO.   In April 1934 the station was authorized to operate at 500 kilowatts during regular hours under the WLW call letters. On May 2, 1934, President Franklin D. Roosevelt pressed a ceremonial button that officially launched WLW's 500-kilowatt signal.

As the first station in the world to broadcast at this strength, WLW received repeated complaints from around the United States and Canada that it was overpowering other stations as far away as Toronto. In December 1934 WLW cut back to 50 kilowatts at night to mitigate the interference, and began construction of three 50 ft. tower antennas to be used to reduce signal strength towards Canada.

With these three antennas in place, full-time broadcasting at 500 kilowatts resumed in early 1935. However, WLW was continuing to operate under special temporary authority that had to be renewed every six months, and each renewal brought complaints about interference and undue domination of the market by such a high-power station.

The FCC was having second thoughts about permitting extremely wide-area broadcasting versus more locally oriented stations, and in 1938, the US Senate adopted the "Wheeler" resolution, expressing it to be the sense of that body that more stations with power in excess of 50 kilowatts are against the public interest.

In 1964...The Beatles made their live U.S. television debut in their first appearance on CBS-TV's "The Ed Sullivan Show." An estimated 73.7 million Americans watched as John, Paul, George and Ringo performed "All My Loving," "Till There Was You," "She Loves You," "I Saw Her Standing There," and "I Want to Hold Your Hand." During "Till There Was You," a message flashed on the screen when John appeared: "Sorry, girls, he's married."

The Beatles appeared on three consecutive Sundays in February 1964 to great anticipation and fanfare as "I Want to Hold Your Hand" had swiftly risen to No. 1 in the charts. Their first appearance on February 9 is considered a milestone in American pop culture and the beginning of the British Invasion in music. The broadcast drew an estimated 73 million viewers, at the time a record for US television. The Beatles followed Ed's show opening intro, performing "All My Loving"; "Till There Was You", which featured the names of the group members superimposed on closeup shots, including the famous "Sorry girls, he's married" caption on John Lennon; and "She Loves You". The act that followed Beatles in the broadcast was pre-recorded, rather than having someone perform live on stage amidst the pandemonium that occurred in the studio after the Beatles performed their first songs. The group returned later in the program to perform "I Saw Her Standing There" and "I Want to Hold Your Hand. 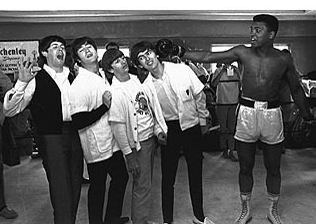 The following week's show was broadcast from Miami Beach where Muhammad Ali (then Cassius Clay) was in training for his first title bout with Sonny Liston. The occasion was used by both camps for publicity. On the evening of the television show (February 16) a crush of people nearly prevented the band from making it onstage. A wedge of policemen were needed and the band began playing "She Loves You" only seconds after reaching their instruments. They continued with "This Boy", and "All My Loving" and returned later to close the show with "I Saw Her Standing There", "From Me to You" and "I Want to Hold Your Hand."

They were shown on tape February 23 (this appearance had been taped earlier in the day on February 9 before their first live appearance). They followed Ed's intro with "Twist and Shout" and "Please Please Me" and closed the show once again with "I Want to Hold Your Hand."

The Beatles appeared live for the final time on August 14, 1965. The show was broadcast September 12, 1965 and earned Sullivan a 60 percent share of the nighttime audience for one of the appearances

A future music star from Britain also appeared on the Sullivan stage that night: Davy Jones, two years before he became a Monkee, performed as part of the cast of the Broadway show "Oliver!"

In 1973...Max Yasgur, former owner of the dairy farm in Bethel, New York at which the Woodstock Music and Art Fair was held in 1969, died following a heart attack at age 53.