The Beatles appeared on the "Ed Sullivan Show" and then were scheduled to fly to Washington for their first American concert. However, a major East Coast Snowstorm caused all flights to be cancelled. So, the Beatles – accompanied by their entourage and press – boarded a train and headed for the nation’s capital.

When the train arrived at Union Station, there were as much as eight inches of snow on the ground, and several thousand crazed fans cheering and pushing toward the group and their travelling party. 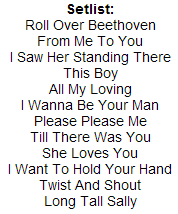 After giving a press conference, the group visited the old WWDC-AM radio, which had been the first station in the U.S. to play a Beatles record. The group then travelled to the Shoreham Hotel before moving on to the arena, at that time called the "Washington Coliseum," for the evening concert.

Among the opening acts scheduled were The Chiffons, but the snow kept them away from D.C. Instead, the Opening Acts for the show were Tommy Roe, Jay & The Americans, and The Righteous Brothers. Attendance was reported to be about 8,000 screaming fans and The Beatles took the stage at 8:31pm. Their entire set consisted of twelve – yes, 12 – songs.


The Beatles attended a post-concert party at The British Embassy, and returned to New York the following day for their SECOND U.S. appearance, at New York’s Carnegie Hall.