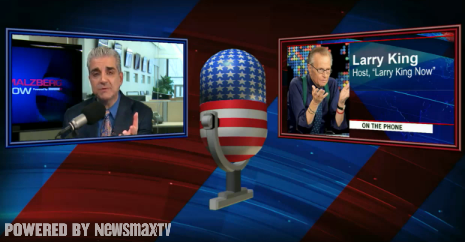 Veteran broadcaster Larry King says CNN's ratings have plummeted because it no longer has a signature show like his that people are used to watching every day.

"People said, I'm going to watch 'Larry King Live,' it's 9 o'clock Eastern, I'm going to tune it on. I still hear from people now all the time how much it became a place. It was the longest-running show in the history of television, to be broadcast at the same time on the same network for almost 26 years. So, it became part of the culture."

He praised CNN's Wolf Blitzer as "a wonderful anchor" and Chris Cuomo as "one of the great personalities on TV." But he says Cuomo isn't being used properly.

"They're probably using him in the wrong place in the morning. I'd have him on in prime time, but again, someone told me that talk television doesn't work anymore . . . All the news networks are down," King said.

He also took swipes at MSNBC and the Fox News Network.

"MSNBC is liberal, Fox is conservative, they both make no bones about it. I would not call them the place to get great information. You get information, but they're preaching to the choir," he said.

"CNN is in the middle. When a big story breaks, CNN gets viewers, but you don't get a big story every day."

"The surprise is the way he did it. Derek Jeter [went on] on Facebook, and he did it like six paragraphs, which is extraordinary," King said.