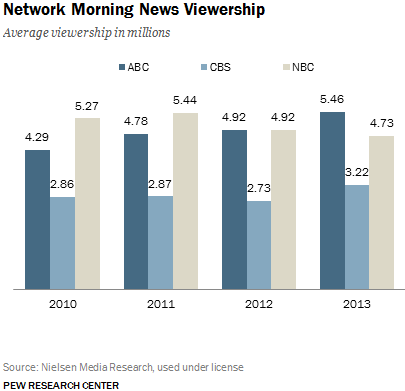 For years, NBC’s Today show had been the gold standard, winning the morning news ratings for 852 consecutive weeks. But, as Pew Research chronicles, ABC’s Good Morning America forged into the lead in 2012 and widened it in 2013 and early 2014, although there have been some weeks when the competition has been close. One question now is how many Americans will go to sleep with the Olympics and wake up with Today – and whether it will be enough to reverse ABC’s morning momentum.

Much of the reversal of fortune between NBC and ABC has been traced to Today’s decision to part company with co-host Ann Curry in June 2012.

ABC first broke NBC’s long winning streak in April 2012, but the Olympics (from July 27-Aug 12, 2012) pushed the pendulum back toward Today. The first week of the games, it beat GMA by 1.6 million viewers and then won again by 1.5 million the next week.  But the week after the Olympics, GMA regained the ratings lead, essentially for good.