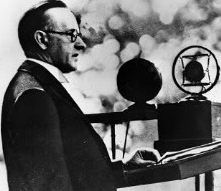 Despite his reputation as a quiet and even reclusive politician, Coolidge made use of the new medium of radio and made radio history several times while President. He made himself available to reporters, giving 520 press conferences, meeting with reporters more regularly than any President before or since.

In 1924...The National Carbon Company became the first network sponsor of a radio program, "The Eveready Hour".

In 1940...MBS, Mutual Broadcasting System, presented the premiere broadcast of the radio play, "The Adventures of Superman."

In 1946...ENIAC (Electronic Numerical Integrator and Computer), built at the University of Pennsylvania, was unveiled as the world's first general-purpose electronic computer.

In 2013…Record producer (Leader Of The Pack, In-A-Gadda-Da-Vida, Society's Child, I Can Never Go Home Anymore, Give Him A Great Big Kiss, Vanilla Fudge's You Keep Me Hangin' On)/songwriter (Leader Of The Pack, Remember-Walking In The Sand, I Can Never Go Home Anymore) George "Shadow" Morton, who had a second career as a designer of golf clubs, died of cancer at the age of 71.
Posted 2:59:00 AM