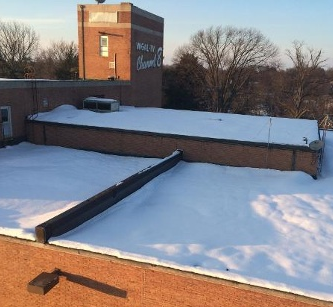 SUNDAY 2/16 UPDATE: WGAL returned to the air Saturday after a roof collapse forced the evacuation of the station's Lancaster studio on Friday.

Further inspection revealed that a concrete support beam and slab had shifted and dropped. As a result the entire roof of the building had been compromised.

Saturday morning, a crane arrived, which allowed crews to survey the damage from a bucket hoisted over the building. Snow was removed and eventually a team went inside and installed a steel beam to reinforce the damaged area.

A portion of the roof collapsed at the studios WGAL-TV8 serving Lancaster-Harrisburg-York, PA Friday afternoon, forcing an evacuation.

Around 3:20 p.m. employees in the newsroom heard what was described as a "thunderous boom." A portion of the roof in an adjacent studio that is no longer in use had collapsed.

Staff called the fire department who responded and inspected the damage. Around 4 p.m., fire officials ordered about 100 people to evacuate.

Further inspection revealed that a concrete support beam and slab had shifted and dropped. As a result the entire roof of the building had been compromised.


A crane will be brought in on Saturday, which will allow crews to better evaluate how extensive the damage is.

It's unclear when WGAL staff will be allowed back in.WGAL is working to bring viewers the news. Updates will be posted on all digital platforms, Facebook, Twitter and Google+