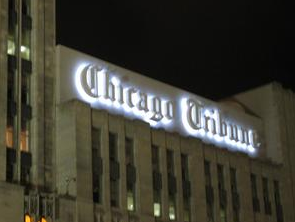 Media company Tribune Co. swung to a third-quarter profit, as the year-earlier period was weighed down by a larger reorganization charge, masking another drop in revenue, according to Marketwatch.

The results come four months after Tribune said it would spin off its publishing assets into a separate company and focus more on its profitable broadcast TV business, becoming the latest in a string of media companies to make such a move.

Tribune emerged from a four-year bankruptcy stay at the end of last year, and it named television veteran Peter Liguori as its chief executive in a signal to the industry that it sees its future in television.

Overall, Tribune reported a profit of $49.8 million, compared with a year-earlier loss of $30.6 million.

The largest declines in advertising revenue were at WGN-TV in , WDCW-TV in , WPIX-TV in and WGN-AM radio in -- due to weaker overall markets, lower ratings in certain time periods in and , and significantly lower ratings for baseball weighing on revenue at both WGN-TV and WGN-AM.