Bieber Gets The Boot In Argentina 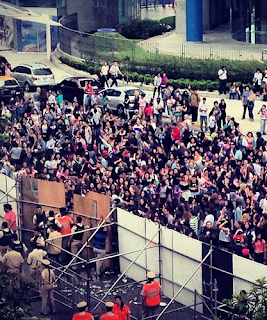 Justin Bieber was reportedly kicked out of a hotel in over the weekend. TMZ has said that the singer was booted from Hotel Faena in because his fans -- who camped outside all week, were damaging hotel property.

And apparently, neighboring hotels don't want Bieber staying at their establishment either.

Photos also surfaced the net that showed Bieliebers in tearing down crowd controlling barricades outside of the singer's hotel.

Hotel Faena reps told E! News that the singer was no longer staying there, but they did not confirm if he was kicked out.

Meanwhile, the singer got food poisoning just before he was set to perform in yesterday (November 10th). He took to Twitter and said, "Sitting here with food poisoning and heard we won #bestmale at the #EMAs. Thanks everyone."

to all my fans at the hotel. thank u. i love u. but please calm down and respect the police. we dont want anyone gettting hurt.
— Justin Bieber (@justinbieber) November 9, 2013


In other news, Biebz has officially been charged for vandalism following his recent graffiti incident in . E! News has reported that the 19-year-old was charged on Friday (November 8th) after local authorities held a three-day testimony and hearing -- which included photographers who capture Bieber in the act, police officers, the singer's bodyguards and others.

Bieber will not be arrested, but he will have to pay a fine. The site has also reported that it will take at least 30 days for the judge to examine the evidence and determine the amount of the fine.

And, Bieber cut short a show in Sunday after falling sick with a nasty bout of food poisoning.

The 19-year-old took to the stage despite feeling ill, only to succumb to his illness and cancel the remainder of the concert.
Posted 4:27:00 AM