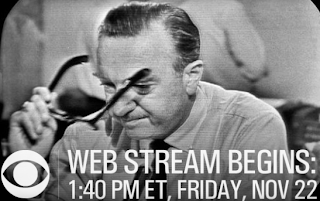 CBSNews.com will stream CBS News' historic broadcast coverage of President John F. Kennedy's assassination to mark the 50th anniversary of the shooting. The extensive online offering will feature the minute-by-minute CBS News broadcasts in real time as they were delivered during the four-day period following the assassination.

CBSNews.com will then stream the CBS News coverage, including the first report from legendary anchor Walter Cronkite and the extraordinary broadcasts from New York, Dallas, Washington and around the world as it unfolded over four days, culminating with the president's funeral.

The historic coverage will continue through the weekend, ending Monday, Nov. 25 with coverage of the president's funeral and other news of that day.