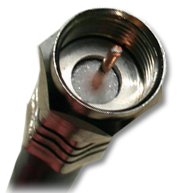 Cord cutting may be more than just a theory, according to a new report from Wall Street research firm MoffettNathanson which found the pay-TV industry shed 113,000 subscribers during the most recent quarter compared with 101,000 in the year ago-period.

That makes the past year the “worst 12 month stretch ever,” in terms of subscriber losses, compared to prior year-long periods, according to the report.

WSJ notes the losses are centered on cable companies, whereas telecom operators such as AT&T’s U-verse and Verizon’s FiOS continue to gain share.

Also playing into the debate on cord-cutting are comments during earnings season from several industry executives who voiced surprise about how quickly consumers are turning to broadband-only subscriptions.