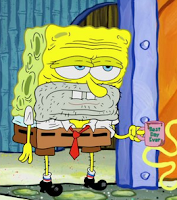 Event television for Nickelodeon is generally only a dial-mover for the younger set, but Monday's topical episode of SpongeBob SquarePants pulled some rather strong ratings among grownups as well, according to THR.

"SpongeBob, You're Fired!," which saw Mr. Krabs lay off his restaurant's most porous and enthusiastic employee to boost profits, averaged a 1.1 rating among adults 18-49 at 7 p.m.

Among total viewers, SpongeBob fared even better. The 14-year-old franchise brought in its biggest audience in two years with a whopping 5.2 million viewers. Besting Hostages (4.53 million) on broadcast, it managed to outperform every cable offering for the night -- with the notable exception of ESPN's Monday Night Football.