Study: Social Media Was Even Harsher

From the conventions to the eve of the final presidential debate, Barack Obama and Mitt Romney have both received more negative than positive coverage from the news media, though overall Obama has had an edge, according to a new study.

That advantage for Obama, however, disappeared after the debates began in early October and news coverage shifted in Romney's direction, mirroring the momentum change reflected in many public opinion polls, the study by the Pew Research Center's Project for Excellence in Journalism found. 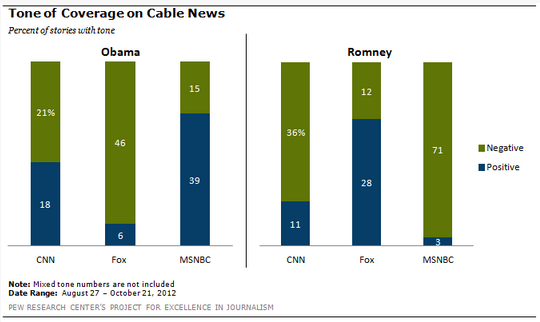 Overall from August 27 through October 21, 19% of stories about Obama studied in a cross section of mainstream media were clearly favorable in tone while 30% were unfavorable and 51% mixed. This is a differential of 11 percentage points between unfavorable and favorable stories.

For Romney, 15% of the stories studied were favorable, 38% were unfavorable and 47% were mixed-a differential toward negative stories of 23 points.

Most of the advantage in coverage for Obama, however, came in September in the form of highly negative coverage for Romney. This was a period when the GOP nominee was losing ground in the polls, he was criticized for his comments about Libya, and a video surfaced in which he effectively dismissed 47% of the American public. 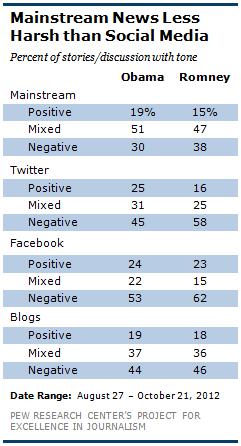 The portrayal of the two candidates this year in the mainstream press stands in marked contrast to what the Project found in 2008 when then Senator Barack Obama was running against Senator John McCain. In that race, Obama's coverage was almost twice as positive as it has been this year (36% vs. 19%) and more positive than negative overall (36% positive vs. 29% negative that year). McCain's coverage four years ago, by contrast, was much more negative than Romney's this year. In 2008, nearly six in 10 stories about McCain were clearly negative in nature (57%), while only 14% were positive.

This treatment in the mainstream media also differs markedly from what the study finds in the newer realms of social media: Twitter, Facebook and blogs. There, the narrative about both men has been relentlessly negative and relatively unmoved by campaign events that have shifted the mainstream narrative-more a barometer of social media user mood than a reflection of candidate action.  On Twitter, for instance, the conversation about the campaign has consistently been harsher for Romney than for Obama. On Facebook, the tone improved for Obama in October with the debates, despite the sense that the president had stumbled in the first one. And in the blogosphere, neither candidate has seen a sustained edge in the narrative in the eight weeks studied.

The study also found a difference between the three network evening newscasts and the morning shows. Obama also fared better in the evening, Romney in the morning.