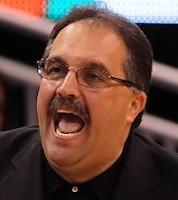 Van Gundy will make his national-television debut by serving as an analyst during the inaugural Navy-Marine Corps Classic, featuring college basketball powers Georgetown vs. No. 10 Florida, on Friday, November 9 at 9 p.m. ET.

The game will be played on the deck of the USS Bataan, at Mayport Naval Air Station in Jacksonville, Fla.
Posted 3:02:00 AM