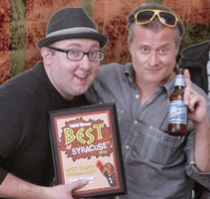 According to a story by Mark Bialczak, The Post-Standard in , Cumulus Media Inc. had requested the temporary restraining order. Scott and Hunter had been the morning hosts on Cumulus-owned station 95X for two years before they resigned on Tuesday, Oct. 16.

Ed Levine, owner of Galaxy, announced the hiring of the two on Thursday, Oct. 18. They've appeared on K-Rock on weekday mornings since Friday, Oct. 19.

Karalunas said the two radio hosts cannot use three phrases she said they coined on the air at 95X: Beer Friday, The Show and Chalk Dust. She also said they cannot solicit other employees of Cumulus.

The next court date for Cumulus' suit is set before the same court on Nov. 21.

A copy of the suit filed in court by Citadel Broadcasting, called "a subsidiary of Cumulus Media Inc.," states that Grosvent and Scott violated their former employers' contractual right of first refusal as well as non-solicitation and "other post-employment obligations."

Levine, Scott and Grosvent have maintained that the pair's contract with Cumulus had expired on Aug. 30 and that officials did not offer the veterans of two years another contract to remain at 95X.