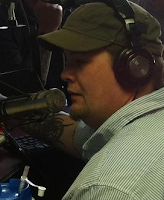 Fatguy, the recently departed program director and DJ for 94.7 KZND The End, is leaving Alaska after three years as a strong advocate of Anchorage's music scene.

Before doing so, Rachel Kenshalo at and.com writes  he's hosting Fatguy's Last Stand on Friday. The event will feature 17 local bands playing on two stages at a local venue.

Not surprisingly, Fatguy isn't the name listed on his birth certificate. Nee Jon Marte, he grew up in foster care and spent his childhood moving around quite a bit, first in California and his later years in Alabama and Mississippi. Moving as much as he did, he was an easy target for bullies. His coping mechanism was to "flip the script" and dub himself Fatguy, a name that stuck from his early teens throughout his radio career.

Marte said that he was immediately in awe of the Anchorage music scene. "When I first got to town, I saw The Hoons play live," he explained. "I thought they were amazing, and I was hooked."

Fans note he worked very hard to promote his station, in addition to his charity work.

That  charity work is Pump Up the Kids, a program for foster care children started by Marte. Growing up in foster care himself, he recognized a need where other charitable holiday programs left off. He noticed that other holiday toy drives, (which he was quick to point out provide an excellent service) were geared towards younger children. Fatguy envisioned a slightly different program.

"We adopted every teenage foster kid in Alaska and made sure they had a Christmas or holiday that was appropriate for them," he explained. "It was beyond simple toy drives - we were able to take care of the teenagers by asking what they wanted for Christmas. Over 600 foster teenagers received guitars, Xboxes, snowboards and other fairly high-priced items that foster kids normally couldn't ask for or hope to receive."

It's an issue that hits close to home. "Growing up in foster care, I know what it's like," he added. "You can't forget the teenagers; they are in the highest risk group. Holidays are especially tough for them, and if we can offer hope and support from the community, it could change mindsets, and maybe it could be the difference between losing these kids to drugs and suicide and violence."

Though Fatguy and KZND ultimately decided to part ways, his charitable legacy will live on at the radio station, which will continue the Pump Up the Kids program.