Hunkering Down With TWC's Jim Cantore

"When Jim Cantore is in your backyard, you know there's trouble," said one passerby. 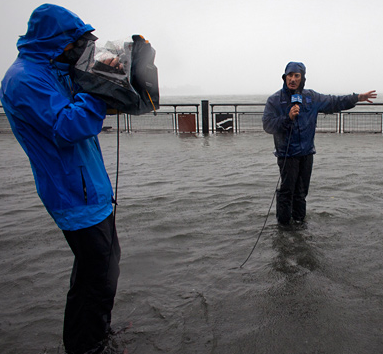 While all was still quiet along the Hudson River, the city had sent the Weather Channel crew scrambling by ordering a mandatory evacuation of the low-lying areas classified as "Zone A" -- such as the spot they had staked out. "We don't know what we are doing or where we are going," Mr. Cantore said. "Logistics have eroded. The things you count on go to the wayside, but you just need to keep doing live shots."

Mr. Cantore and a dozen crew members originally planned to stay at the Double Tree in the Financial District, but that wound up being evacuated too, so producers attempted to secure other accommodations. They found rooms available at the Millennium Hilton in midtown, but it was unlikely Mr. Cantore would be sleeping much in any case. He expected to be back out in the weather as early as 4 a.m. Monday morning.

Mr. Cantore, along with most meteorologists, predicted Hurricane Sandy will be one of the worst storms the East Coast has seen. "I brought out the dry suit for this one," he said. "In New York City you never know where you will have to take cover." Mr. Cantore has taken shelter everywhere from cars to public restrooms over the years covering storms.
His supplies included a big bottle of water, vitamins and some PowerBars. "You come in knowing you could go 24 to 48 hours with nothing," he said.

Despite all that, Mr. Cantore didn't seem daunted. He's previously covered hurricanes including Katrina, Andrew and Rita. Coming downtown to cover Sandy on Sunday morning returned him to the same location from which he covered Irene last year. "Safety comes first and I am always nervous for my crew, but you do your job and what needs to be done," he said.

Between his live broadcasts, Mr. Cantore turned to Twitter -- where he has nearly 150,000 followers -- using his iPhone to post radar images and a photo of one of the last cruise ships to come into port. He also tweeted warnings about the severity of Sandy.