Like most other people, Dennis Elsas has seen and heard quite a few things during the course of his career. Fortunately for music fans, he also recorded them. 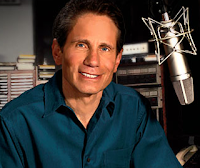 As one of New York's enduring and well-known radio personalities, Elsas has interviewed many rock greats during his more than 35-year career, including Elton John, Levon Helm, Pete Townshend and Jerry Garcia.

His historic interview with John Lennon in September 1974, which stretched into two hours and covered a myriad of topics, including Beatles' memories and the band's future plans, has been featured in numerous books, documentaries and films. It is in the permanent collection of the Paley Center For Media.

Since 2007, his website has been home for this trove of archives. Recently, however, Elsas has taken some of his classic interviews, photographs and recollections of historic moments in radio on the road. He has created a live multimedia presentation, "Rock `N' Roll Never Forgets," which has shown at several venues during the past year.

The show,writes Christina Hennessy at ctpost.com, concludes with a question-and-answer session, rolls in to the Avon Theatre in Stamford, CT on Wednesday, Nov. 7. Elsas is likely to attract fans from his days at WNEW-FM NYC, as well as those who have been tuning in to his show on WFUV since 2000 and on his satellite radio show Classic Vinyl on Sirius/XM.

Elsas, a Queens, N.Y., native, grew up in the 1960s listening to such Top 40 AM radio stations as WABC, WMCA and WINS. However, by the time he entered college, FM radio was beginning to change, increasingly adopting free-form progressive rock formats and other original programming.