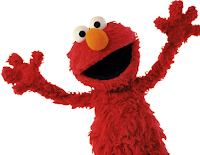 In the wake of Hurricane Sandy inflicting its punishing blow on New York City Monday (October 29th), younger listeners to the city's WNYC 93.9 FM/ 820 AM got some reassurance the next morning from Sesame Street's own Elmo.

Elmo appeared on the Brian Lehrer Show along with Dr. Rosemarie Truglio, of Sesame Street's Education and Research Department, who spoke about helping children deal with the stress of the storm and its aftermath.

In the segment, Elmo confessed to being scared during Sandy, even though he was with his mommy and daddy, saying he had wanted to know, "Will the wind ever stop blowing?" Sesame Street had done an episode about dealing with hurricanes years ago, before Katrina struck, and Elmo explained to Lehrer Tuesday that on it he went shopping with his parents for, quote, "water and some peanut butter and tuna fish and stuff like that."

On that episode, Big Bird's nest was ruined and Sesame Street residents rallied around to help rebuild it.