Like CNN when a war starts, The Weather Channel gets a rise out of hurricanes. And in more ways than one, Hurricane Sandy looks to be one for the history books. 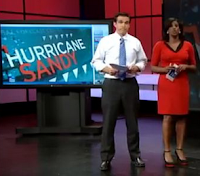 "Monday is shaping up to be the largest in history for Weather.com," a spokeswoman said.

Even more important, as Sandy thrashes the Eastern seaboard and takes aim at New York City, the Atlanta-based Weather Channel has given New York-based NBC News a claim on being the go-to source for weather news among the major networks.

Combined, the two operations have some 30 correspondents in the field, according to Steve Capus, president of NBC News.

"Nobody can come anywhere close to matching our resources for covering something like this," Mr. Capus said in an interview.