Police continue to investigate a bomb threat and extortion plot called in early Friday morning to the CNN Center. 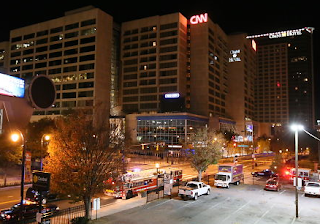 The Atlanta Journal Constitution is reporting that shortly after 4 a.m., police received a call from a person claiming to have planted a chemical bomb somewhere on the campus of the Atlanta landmark, Atlanta Police Capt. Adam Lee III told reporters.

“He threatened to detonate that bomb, and demanded $15,000 and I believe an airline ticket out of town,” Lee said.

Police closed down roads surrounding the CNN Center and adjacent Omni Hotel while teams went floor-by-floor searching for any suspicious items that might be an explosive.

Neither building was evacuated.

By about 5:30 a.m., police completed the search without finding anything and reopened the roads.

It’s unclear whether the bomb threat was a decoy away from any other crimes, police said.