From Ken Tucker from Entertainment Weekly 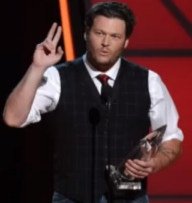 Quality won out at the CMA awards on Thursday night, as Eric Church’s superb Chief won album of the year and the Miranda Lambert-Blake Shelton composition “Over You” took song of the year. The married couple Lambert and Shelton also won the female and male vocalist awards as well. The show itself was rife with agreeably overblown production numbers including a reproduction of a French cafe for Taylor Swift’s fine song “Begin Again” that looked as though it had been assembled from sets left over from an old Carol Burnett Show sketch. In other words, the night was a hoot.

Speaking of sets, Faith Hill seemed to have borrowed hers from the ABC chestnut Love American Style logo, a heart-shaped American flag. It’s too bad Hill’s voice was largely obscured by the sound mix — she sounds and looks great. Hill came across best during the all-star tribute to Willie Nelson (who was given a Lifetime Achievement award), singing a ringingly clear duet with hubby Tim McGraw on “Good Hearted Woman.” Could we please have a new Faith Hill album soon?

Hosts Carrie Underwood and Brad Paisley opened the show with jokes about the pregnancy of Sugarland’s Jennifer Nettles (she was in the audience, her due-date close), PSY’s “Gangnam Style” (Underwood’s execution of the dance move in very high heels was impressive), and a routine about Taylor Swift’s romance with the Kennedy family and “We Are Never Ever Getting Back Together” that seemed to have everyone laughing except, perhaps, Swift — why else would the cameras not cut to her, as they did to every other celeb for every other little punchline?

Entertainer of the Year: Blake Shelton.

Song of the Year: "Over You," Blake Shelton and Miranda Lambert.

Musician of the Year: Mac McAnally.