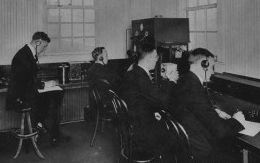 Created by the Westinghouse Electric Corporation on November 2, 1920, it is the world's first commercial radio station, a distinction that has also been challenged by other stations, although it has claimed to be the "world's first commercially licensed radio station". KDKA is currently owned and operated by CBS Radio and its studios are located at the combined CBS Radio Pittsburgh facility on in Green Tree; its transmitter is in Allison Park.

According to the KDKA website, The U-S Department of Commerce, Bureau of Navigation, which served as the radio licensing agency of the day, issued the first radio license ever to KDKA, on October 27th, 1920.  Many people ask if “KDKA” stands for anything — and the simple answer is: no.  The call letters “KDKA” were assigned from a roster maintained to provide identification for ships and marine shore stations, these being the only regular services then in operation under formal license by the Federal Government. “KDKA” was simply the next set of call letters available on the roster.

Plans were finalized with the Pittsburgh Post morning newspaper to acquire election returns by telephone. The election night broadcast, which began at 6-pm on Tuesday, November 2nd, 1920, originated in a tiny, makeshift shack, atop one of the Westinghouse Electric buildings in East Pittsburgh.
Posted 1:47:00 PM