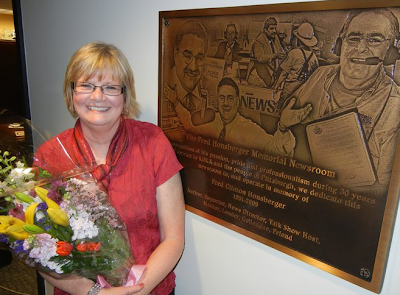 The 1020 KDKA-AM newsroom in Pittsburgh is now the Fred Honsberger Memorial Newsroom in honor of the longtime personality.

A plaque was unveiled by Honsberger's wife, Christine, along with KDKA General Manager Michael Young before a crowd of KDKA staffers, invited guests, and the Honzman's family.

Honsberger, who served as anchor, reporter, news director and talk host, died in December, 2009 after a long illness. He was on the air from a studio at his Pittsburgh-area home until a few days before his death.