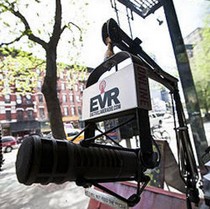 Video may have killed the radio star, but some New Yorkers are breathing life back into the airwaves. “I used to listen to the radio as a kid,” said Williamsburg Web developer Chris Edwards, 29. “Then overnight, every DJ played the same set. I stopped listening to radio.”

What was lacking, he tells Emily Anne Epstein at metro.us, was a sense of community. Then Edwards discovered East Village Radio, an Internet radio station that broadcasts from a tiny storefront on First Avenue at First Street.

EVR general manager Peter Ferraro told Metro he has watched the station grow from a pirate radio operation in 2003 to a full-fledged Web station that now reaches over 90,000 listeners a day.

There are 98 traditional radio stations in the New York metro area. Meanwhile, hundreds of Internet radio stations like EVR and Barnard College’s WBAR have all rapidly increased listenership in the last few years.