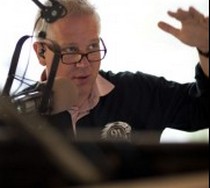 From Jay Yarow, The Wire at Business Insider

After she spoke on stage at SAI's Startup 2011, we pulled her aside and asked her about what it's like working for Beck. She said it's not that different from working with Arianna, actually.

They're both maniacally focused on building their businesses.

Betsy Morgan is President of The Blaze. Before working for Glenn Beck's news site, Morgan was a CEO at The Huffington Post, where she kept web traffic coming in deluges after the 2008 Obama election.
Posted 1:46:00 PM