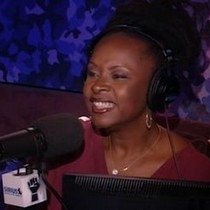 Howard Stern's sidekick Robin Quivers may not be on his Sirius-XM satellite radio show for much longer, according to a story by Courtney Hazlett, for today.com.

In an exclusive interview with Radar Online, Quivers said that she may soon leave to do her own thing. "I love to do radio and television and I've always wanted my own television show, so I've been putting out feelers for those kinds of things," she told the website.

And she apparently already has a goal in mind: to potentially replace Oprah as the queen of daytime TV. (The final episode of "The Oprah Winfrey Show" airs May 25.) "Let's hope," she replied when asked if she was angling to replace Winfrey.

"It will be like a talk show, but with subjects that I'd be interested in," Quivers told Radar of her television plans. "I think I have some interesting things to say and I don't think anybody out there is saying them."

Stern signed a new five-year deal in December with Sirius-XM, but had said that the rest of the cast would be negotiating their own contracts. Not long after, Quivers announced her own deal on the show: "I have decided ... after a long and very wonderful association with this show for almost 30 years ... that it's time ... It is my decision to go out ... after this next five years!"