MORE THAN 100 KILLED IN MASSIVE BEIRUT EXPLOSION: More than 100 people were killed and thousands wounded in a massive explosion in Beirut, Lebanon, Tuesday at the city's port.

The cause of the huge blast, which had the force of a 3.5-magnitude earthquake and was felt as far as 180 miles away, is still unclear, but it appeared to have been triggered by a fire. Interior Minister Mohammed Fahmi told a local TV station that it appeared the explosion was caused by the detonation of more than 2,700 tons of ammonium nitrate stored in a warehouse at the dock since it was confiscated from a cargo ship in 2014. Local TV stations also reported that a fireworks warehouse was involved. The blast destroyed a number apartment buildings, as well as grain silos at the port, where it's estimated some 85 percent of Lebanon's grain was stored.

➤NEGOTIATIONS CONTINUE ON CORONAVIRUS RELIEF PACKAGE AS U.S. CASES NEAR FIVE MILLION: Negotiations ground on Tuesday on a new coronavirus relief package, with both Senate Democrats and the White House reporting some progress in an afternoon session yesterday, while they're still not close to an agreement. While consensus has been reached on another round of $1,200 stimulus payments to Americans and making changes to the Paycheck Protection Program to allow particularly hard-hit business to get another loan under it, a key impasse remains on extending the $600 per week additionally unemployment benefit, with the White House and Republicans wanting it to be significantly reduced.

Those talks are continuing as the U.S. is nearing five million cases, a milestone that should be reached by this weekend at the current rate of more than 60,000 new confirmed cases a day. That rate is down from a peak of over 70,000 daily in the second half of July, but cases are continuing to rise in 26 states, and deaths are rising in 35 states, with a national average of more than 1,000 deaths per day. There have been more than 156,800 deaths as of early this morning, according to Johns Hopkins University's count, and more than 4,771,000 confirmed cases.

In an interview with Axios on HBO, President Trump said that he thinks the coronavirus is as well-controlled in the U.S. as it can be, saying when asked about the more than 150,000 deaths, "They are dying, that's true. And you have -- it is what it is." Trump also pointed to a statistic of the number of deaths compared to the number of cases to say the U.S. is doing well, ranking 14th among 20 countries. However, interviewer Jonathan Swan cited the per capita death rate, the number of deaths compared to population, with the U.S. having the world's fourth-highest per capita death rate.

Mississippi Gov. Mandates Face Masks: After having long refused to do so, Mississippi Republican Governor Tate Reeves yesterday issued an order mandating face masks because of a surge of cases in his state. He said, "Wearing a mask -- as irritating as it can be, and I promise you I hate it more than anyone watching today -- is critical. 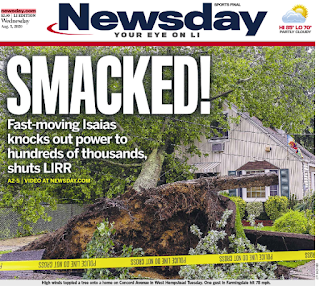 After making landfall as a Category 1 hurricane in North Carolina late Monday night, Tropical Storm Isaias raced up the East Coast Tuesday, killing at least six people as it spawned tornadoes, dropped torrential rains, and whipped winds that caused power outages and uprooted trees. Two people were killed by a tornado that hit a North Carolina mobile home park, a woman died in Pennsylvania when her car was overtaken by water and swept downstream, two people were killed by falling trees in Maryland and New York City, and a sixth person was killed in Delaware when a tree branch fell on them. Philadelphia's Schuylkill River was projected to crest early today at 15.4 feet, it's highest level in more than 150 years.

➤TRUMP ENCOURAGES MAIL-IN VOTING IN FLORIDA: After months of criticizing mail-in voting, making unsupported accusations that it would lead to widespread voter fraud, and threatening just this week to sue Nevada after it passed a vote-by-mail law, President Trump yesterday (August 4th) tweeted to encourage voting by mail in Florida, a critical swing state. Trump tweeted: "Whether you call it Vote by Mail or Absentee Voting, in Florida the election system is Safe and Secure, Tried and True. Florida’s Voting system has been cleaned up (we defeated Democrats attempts at change), so in Florida I encourage all to request a Ballot & Vote by Mail!" White House Press Secretary Kayleigh McEnany insisted Trump hadn't changed his views, claiming he supports absentee voting by mail, as opposed to states mailing out ballots to all voters even if they haven't requested them.

➤MARLINS WIN IN RETURN TO PLAY: The Miami Marlins got the win yesterday in their return to play after eights days suspended due to a coronavirus outbreak on the team in which 17 players tested positive. Packed with replacement players for those who have the virus, the Marlins beat the Baltimore Orioles, 4-0. Those players filling out the Marlins' 30-man roster included some from the team's minor league camp, others that they get through trades, and a few taken off the waiver wire.

➤DEFENDING U.S. OPEN CHAMPION NADAL TO SKIP IT THIS YEAR: Defending U.S. Open champion Rafael Nadal said yesterday that he will skip the Grand Slam tournament this year because of the coronavirus pandemic. The 34-year-old Spaniard broke the news in a series of tweets, explaining, "The situation is very complicated worldwide, the COVID-19 cases are increasing, it looks like we still don’t have control of it," and saying he'd "rather not travel." The U.S. Open is set to begin August 31st in Queens, New York. The world's current top-ranked woman's player, Australia's Ash Barty, previously announced that she wouldn't play in the U.S. Open this year.


➤IN REVERSAL, NO FANS TO BE AT INDY 500: There won't be any fans allowed at the Indianapolis 500 later this month, after Roger Penske, who bought the iconic speedway in January, changed his mind. Penske at first said he wouldn't run the 104-year-old race without fans, and then said spectators would be allowed at 50 percent capacity. That was later lowered to 25 percent capacity, and now the decision has been made to not have fans at all, as the number of cases continue to rise across the country and in Indiana. Penske, who told AP it was "the toughest business decision I’ve ever made in my life," explained, "Obviously we want full attendance, but we don’t want to jeopardize the health and safety of our fans and the community." The Indy 500 was earlier moved to August 23rd from Memorial Day weekend because of the pandemic.
Posted 4:04:00 AM