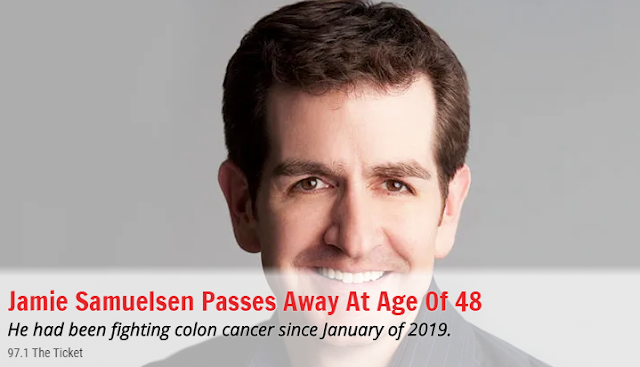 He was 48, according to mlive.com.   He is survived by his wife and three children.

Earlier last week, the WXYT 97.1 The Ticket host revealed to listeners he was diagnosed with colon cancer nearly two years ago.

According to The Ticket, Samuelsen said he waited to make his fight with cancer public because he wanted his relationship with listeners to be business as usual.

“Each morning since my diagnosis, I got up, turned on the radio mic and got to talk sports,” Samuelsen said. “I needed the escape from cancer, just like so many of our listeners who face hardships, grief and illness, too, they turned to us in the morning for some levity in this crazy world. So I wanted to continue to have fun and not let cancer get in the way of doing what I loved. Connecting with listeners, laughing, teasing Stoney, all of it, it helped me be normal, while continuing to fight this disease.”

Samuelsen had been on the airwaves of Detroit sports talk radio for 25 years. He’s been with 97.1 the ticket since 2012.

One of Samuelsen’s co-hosts on radio and television, Detroit News columnist Bob Wojnowski, announced the death on Twitter on Saturday night on behalf of the family.


I am so sad and sorry to pass this along, at the family's request. Jamie Samuelsen, the best damn friend you could ever have, a tremendous broadcaster on @971theticketxyt passed away tonight at 48. He was surrounded by his wonderful family, and he went peacefully.
— Bob Wojnowski (@bobwojnowski) August 2, 2020


Class act by ⁦⁦@tigers⁩ to recognize ⁦@JamieSamuelsen⁩ before the game. One of the kindest souls in Detroit sports media and a great professional who will be sorely missed by all. pic.twitter.com/7w5tKMZajf
— Carlos Monarrez (@cmonarrez) August 2, 2020


“Jamie was dedicated to his craft and we will miss his enthusiasm for our city & sports franchises. Our thoughts & hearts are with Jamie’s family & friends at The Ticket,” the team tweeted Saturday night.
Posted 11:00:00 AM