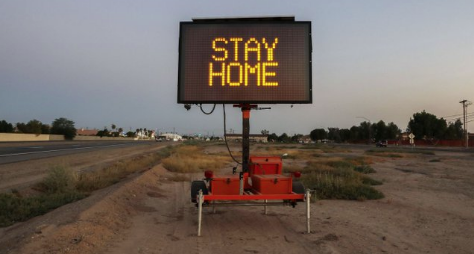 BIRX SAYS CORONAVIRUS 'EXTRAORDINARILY WIDESPREAD' IN U.S., AREA OUTBREAKS NEED TO BE CONTROLLED BEFORE SCHOOLS REOPEN: White House coronavirus task force leader Dr. Deborah Birx said yesterday that the coronavirus outbreak is in what she called a "new phase" in the U.S., saying on CNN's State of the Union, "What we are seeing today is different from March and April. It is extraordinarily widespread."


Dr. Birx: "We need all of the public to help us get control of this virus... It's not super-spreading individuals, it's super-spreading events and we need to stop those." https://t.co/OpUEzHYT5M pic.twitter.com/LGAXoUo06X
— The Hill (@thehill) August 2, 2020


She said that it's not just in urban areas anymore, with rural areas experiencing outbreaks as well, and again called on Americans to wear face masks and practice social distancing. Birx also said that areas that have outbreaks need to have them controlled before schools can reopen, explaining, "In the areas where we have this widespread case increase, we need to stop the cases, and then we can talk about safely reopening." She agreed with a recommendation from Centers for Disease Control and Prevention Director Robert Redfield that schools in areas with a five percent coronavirus testing positivity rate or higher should have virtual schooling from home.

Meanwhile, House Speaker Nancy Pelosi said yesterday that she doesn’t have faith in Birx. Pelosi said on ABC's This Week when asked if she had confidence in her: "I think the president has been spreading disinformation about the virus and she is his appointee so I don’t have confidence there, no."

Daily Statistics: The U.S. has had more than 154,800 coronavirus deaths as of early this morning, according to Johns Hopkins University's Count, and just under 4,668,000 confirmed cases.

Kosovo's Prime Minister has Coronavirus: Kosovo’s Prime Minister Avdullah Hoti is the latest world leader to be diagnosed with the coronavirus. Hoti said Sunday that he's tested positive, but doesn't have serious symptoms, writing on Facebook that he only has a "very mild cough," and that he will self-isolate for two weeks while working from home.


➤MARINES END SEARCH FOR EIGHT SERVICEMEMBERS AFTER SINKING OFF CALIFORNIA COAST: The Marine Corps announced Sunday that it had ended the search for eight servicemembers who've been missing since their landing craft sank off the Southern California coast during a training exercise last Thursday, and they are now presumed dead. Eight Marines were rescued when the amphibious assault vehicle sank in hundreds of feet of water with 15 Marines and one Navy sailor on board, but one of them later died and two are in critical condition. The landing craft was one of 13 that had just finished an exercise when it began taking on water. Troops on two of the other assault vehicles responded quickly, but couldn't stop the sinking. The cause of the accident is not yet known.

➤ISAIAS STRENGTHENS SLIGHTLY, ON COURSE TO HEAD UP EAST COAST: Tropical Storm Isaias [ees-ah-EE-ahs] strengthened slightly Sunday as it remained about 50 miles off the eastern coast of Florida, bringing heavy rain and some flooding to the state's Atlantic cost. The storm is heading north-northwest and is expected to be near hurricane strength by the time it reaches the Carolinas today. After that it's on course to swirl up along the east coast of the mid-Atlantic states, and Tropical Storm watches have been posted along the Eastern Seaboard as far north as Rhode Island.

➤CALIFORNIA WILDFIRE CAUSES EVACUATION OF NEARLY 8,000: Nearly 8,000 people have had to evacuate from their homes in Southern California because of a wildfire burning out of control in Cherry Valley. The U.S. Forest Service said that the Apple Fire, which began Friday afternoon, had grown to over 20,000 acres of yesterday (August 2nd).

➤MICROSOFT IN TALKS TO BUY TIKTOK IN U.S.: Microsoft confirmed yesterday (August 2nd) that it's in talks to buy TikTok's U.S. operations from Chinese company Byte Dance. Microsoft would also be buying the popular video app's operations in Canada, Australia and New Zealand. The news comes after President Trump said Friday that he'd soon be banning TikTok in the U.S., and Microsoft said it had spoken with Trump about his concerns and about security and censorship regarding the possible purchase. The Trump administration has previously expressed concerns about national security because of TikTok's Chinese ownership, and Secretary of State Mike Pompeo said on Fox News Channel yesterday, "These Chinese software companies doing business in the United States, whether it’s TikTok or WeChat -- there are countless more . . . are feeding data directly to the Chinese Communist Party, their national security apparatus." TikTok said earlier Sunday that it's U.S. user data is stored in the U.S., with strict controls on employee access, and its biggest investors come from the U.S. 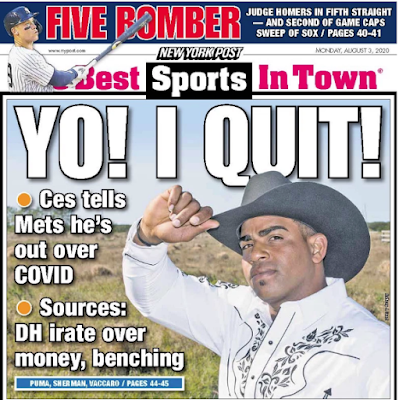 ➤METS CESPEDES OPTS OUT OF REST OF SEASON: New York Mets outfielder Yoenis Cespedes has opted out of playing the rest of the season because of concerns about the coronavirus, something the Mets learned from his agent hours after he didn't show up for the team's game against the Atlanta Braves without explanation. Cespedes played in the Mets' loss Saturday night to Atlanta, going 0 for 4. The 34-year-old Cespedes missed most of the past two years with leg issues, including have to have surgery on both heels and then breaking his ankle.

➤REDS SWEEP TIGERS IN FIRST DOUBLEHEADER WITH SEVEN-INNING GAMES: The Cincinnati Reds swept the Detroit Tigers yesterday in the first doubleheader with seven-inning games, a change made by MLB starting this past weekend for the coronavirus-shortened season. MLB is expecting a lot of doubleheaders because of game postponements due to weather and the coronavirus. The Reds won the first game 4-3 and the second 4-0.


Tigers' Alexander Sets MLB Record: In the first game of the doubleheader, Tigers pitcher Tyler Alexander, who entered the game in the third inning, struck out nine hitters in a row, setting a record for relievers. The overall MLB record for consecutive strikeouts is held by Hall of Famer Tom Seaver, with 10, in April 1970 for the New York Mets.

➤MAGIC FORWARD ISAAC TEARS ACL: Orlando Magic forward Jonathan Isaac tore the ACL in his left knee yesterday during a game against the Sacramento Kings. The injury came in the fourth quarter of the Magic's 132-116 win, with Isaac having to be wheeled off the court. It was only Isaac's second game back, after he hyperextended his knee on January 1st.

➤KANG WINS IN LPGA TOUR'S RETURN: American Danielle Kang won the Drive on Championship at Inverness Golf Course in Ohio Sunday (August 2nd) in the LPGA Tour's return to play from its coronavirus shutdown. Kang, who's ranked fourth in the world, had a one-shot victory over France's Celine Boutier, finishing at 7-under 209.

➤KESELOWSKI GETS WIN IN NEW HAMPSHIRE, THIRD SINCE NASCAR'S RETURN: Brad Keselowski won at New Hampshire Motor Speedway yesterday (August 2nd), beating Denny Hamlin by 1.647 seconds for his third win since NASCAR returned from its coronavirus shutdown. A limited number of fans were allowed in the stands, with AP reporting that the Speedway, which has a capacity of about 76,000, appeared to be about 10 percent full.


Tropical storm and flash flood watches have been posted ahead of the arrival of #Isaias across a wide swath of the mid-Atlantic and Northeast. Heavy rain and gusty winds will be the main threats as this storm continues to track northward: https://t.co/Fl3dwryZqb pic.twitter.com/Id27ivIrct
— AccuWeather (@breakingweather) August 3, 2020