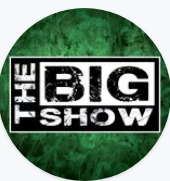 “The Big Show” will be hosted by Earl David Reed, Megan Carter and Pat McMahon. Every afternoon the hosts will entertain listeners with their unique takes on the top headlines of the day and topics that focus on the community’s general interests. The show is a non-stop blend of hilarious conversation, pop culture headlines, news and information, sports, and even the occasional dose of parenting and relationship advice. Interactive and socially-engaged, for listeners, the dynamic trio are their friends, and they don’t want to miss a chance to hang out with them daily.

Reed is a nationally recognized stand-up comedian who has played some of the nation’s biggest comedy clubs and has appeared on “The Tonight Show.” Carter most recently served as the afternoon host on iHeartMedia Rochester’s KISS 106.7. McMahon has also been an important contributor to iHeartMedia Rochester’s success in his six years with the company.

“Earl, Megan and Pat clicked from the minute we put them together,” said Joe Bonadonna, Program Director for Radio 95.1. “They are the three friends you want with you when you’re getting a garbage plate, grabbing a Genny Light or spending the day at Seabreeze.”
Posted 2:48:00 AM