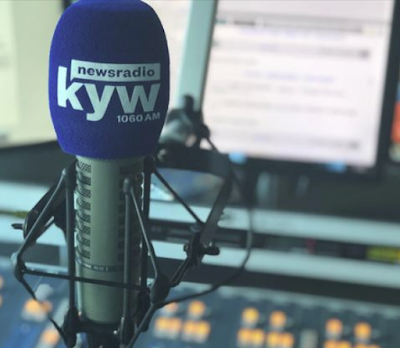 Longtime Philadelphia listeners know that clickclickclick sound well. For decades, they tuned into KYW Newsradio to listen to local news reported with the sound of a clacking teletype in the background.

But the station has stopped using that sound — an iconic Philadelphia radio noise is gone.

The Philadelphia Inquirer reports the station’s explanation came with a generous dash of antiquarian whimsy.

“They stopped making the ribbons for the trusty teletype in 1986, and our supply finally ran out — so alas, Old Reliable is out of commission until further notice,” Alex Silverman, KYW’s brand manager, said in a statement. “As technology has evolved over the years, so has KYW Newsradio, and the sound of the station should reflect the modern, nimble, multi-platform news organization we’ve become.”

Last spring, Entercom's KYW revealed its new jingle, which pops up as the transition for traffic, weather, and breaking news. Although the station had updated its jingle every few years, it had been more than a decade since it was changed so dramatically. The new jingle includes more live instruments, including local string musicians, trumpets, piano, guitar and brass.

KYW stopped broadcasting school closing numbers in 2017, and dozens of people shared their memories of anxiously waiting to hear that “magic snow-day number,” The Inquirer previously reported. The station cited the many ways families were getting this news — school website, texts, social media — without having to tune into the radio as a reason to end this ritual.

When news of the change was reported by the Philadelphia Inquirer late Thursday, Silverman got into a Twitter exchange with Steve Capus, the Bucks County native and Temple University graduate who went on to become president of NBC News and executive editor of CBS News, according to The Philadelphia Business Journal.

Capus responded to the news with "another iconic Philadelphia sound" of booing and added, “Love @KYWNewsradio but don’t like this decision. Feels like a 'New Coke' idea.”

Silverman replied to Capus, saying that he didn’t see the switch as a wholesale change and noting that KYW’s presentation has evolved over the years.

“Have to ask the question – does a canned sound of an obsolete device still fit?” Silverman said. “One’s nostalgia is another’s anachronism, and yet another’s 'what the heck is that?'”


Hi Steve! certainly don't see it as that kind of wholesale change; our presentation has evolved over the decades. Have to ask the question - does a canned sound of an obsolete device still fit? One's nostalgia is another's anachronism, and yet another's "what the heck is that?"
— Alex Silverman (@AlexSilverman) August 6, 2020


In addition to being KYW’s program director, Silverman has taken on the title of brand manager for the station. With that comes the challenge of adapting an AM all-news station to the challenges of modern radio listeners, who don’t frequent the AM dial as much as their parents and grandparents, have access to more news sources and demand information when they want it. Ratings at the station have sagged in recent years, though it still regularly sits among the top five in overall listeners each month.

So perhaps it is not a surprise that Silverman chose to focus on modernizing KYW’s jingle, logo and teletype.