The Rundown: Virus Relief Deal On Brink Of Collapse 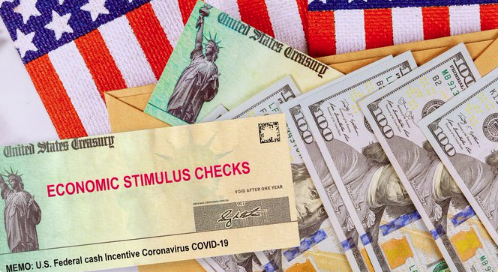 Talks on a new coronavirus relief package were on the brink of collapse last night after another meeting yesterday led to little progress on reaching agreement between House Democrats and the White House and Senate Republicans. President Trump is considering using executive orders to address evictions and unemployment, and Treasury Secretary Steven Mnuchin said yesterday, "The President’s first choice is to do a deal. . . . If we conclude tomorrow that there is not a compromise position on the major issues the president has alternatives." Senate Minority Leader Chuck Schumer said of what the Democrats want, "We believe the patient needs a major operation while Republicans want to apply just a Band-Aid," while Senate Majority Leader Mitch McConnell laid the blame on the Democrats, saying, "Day after day, they’ve stonewalled the president’s team."

The U.S. has had more than 160,104 deaths from the coronavirus as of early this morning, according to Johns Hopkins University's count, an increase of some 1,900 deaths from the same time 24 hours earlier, and more than 4,883,500 confirmed cases. 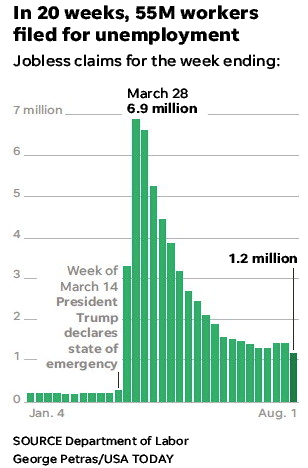 A study out yesterday in JAMA Internal Medicine shows that people with the coronavirus who are asymptomatic are just as contagious as those who show symptoms, backing up what had been suspected. Researchers found that asymptomatic people have about as much of the virus in their nose, throat, and lungs as those with symptoms, and carry that viral load just as long as symptomatic people.

1.2 Million Apply for First-Time Unemployment Benefits: Nearly 1.2 million Americans applied for first-time unemployment benefits last week, the Labor Department reported yesterday, down 249,000 from the week before after rising for two straight weeks, but still marking the 20th straight week that at least 1 million people filed for the first time. Before the pandemic hit, it had never been over 700,000 in one week, even during the Great Recession.

U.S. Lifts Warning Against Any International Travel: The State Department yesterday lifted its warning against any international travel because of the coronavirus pandemic that it issued on March 19th, saying that conditions have improved enough in some places to return to issuing country-specific warnings. However, Americans still are restricted from visiting by many countries, including those in the European Union, because of the state of the coronavirus pandemic in the U.S.

Ohio Gov. DeWine Negative for Virus After Positive Earlier in Day: Ohio Republican Governor Mike DeWine tested negative for the coronavirus yesterday after having tested positive earlier in the day before he was supposed to meet with President Trump. The test DeWine took the second time was a different type that's considered to be more accurate than the rapid-result test that said he was positive. He plans to take another test on Saturday.


New York Attorney General Letitia James sued the National Rifle Association yesterday alleging fraud, as she seeks to shut the powerful gun rights organization down. The lawsuit claims that top NRA executives illegally diverted tens of millions of dollars for personal trips, no-show contracts for associates, and other questionable purposes. James charged the NRA, quote, "has operated as a breeding ground for greed, abuse and brazen illegality." The lawsuit also named the NRA's longtime CEO Wayne LaPierre, and three other current and former executives, with LaPierre accused of spending millions of dollars on private travel and personal security, accepting expensive gifts from vendors, and setting up a $17 million contract without board approval that he'd get if he were to leave the NRA. The NRA's headquarters is in Virginia, but it was chartered as a nonprofit in New York in 1871 and is incorporated in the state.

This was a baseless, premeditated attack on our organization and the Second Amendment freedoms it fights to defend. You could have set your watch by it: the investigation was going to reach its crescendo as...
— NRA (@NRA) August 6, 2020


NRA President Carolyn Meadows called James a "political opportunist" pursuing a "vendetta" with an attack on its members' Second Amendment rights, and announced a countersuit.

➤BIPARTISAN CALLS FOR POSTAL SERVICE TO REVERSE CHANGES DELAYING MAIL, DELIVERIES: Republican and Democratic lawmakers are calling on the U.S. Postal Service to immediately reverse changes to its operations made by the new postmaster general that are causing delays in mail and deliveries across the country, and is causing additional worries ahead of an expected big increase in mail-in voting this fall because of the coronavirus pandemic. The cost-cutting changes made last month by the new postmaster general installed by President Trump, Republican fundraiser Louis DeJoy, eliminate overtime for hundreds of thousands of postal workers and require that mail be kept until the next day if distribution centers are running late.

➤DAY, TODD TIED FOR LEAD AFTER PGA CHAMPIONSHIP OPENING ROUND: Australian Jason Day and Brendon Todd of the U.S. are tied at the top of the leaderboard after the opening round Thursday of the PGA Championship, one of men's golf's four majors, at TPC Harding Park in San Francisco. At 5-under 65, they were one stroke ahead of nine players behind them tied for second place. Tiger Woods ended the first round three strokes back.

➤66 NFL PLAYERS OPT OUT OF SEASON: A total of 66 NFL players have opted out of the 2020 season due to the coronavirus pandemic as of yesterday's deadline. Nearly half of them are lineman, 20 offensive and 11 defensive, and there were no quarterbacks. The New England Patriots have the most players opting out, eight, and the Cleveland Browns were next with five players. Only three teams -- the Pittsburgh Steelers, Atlanta Falcons and Los Angeles Chargers -- have no players opting out.

➤TEXAS TECH FIRES WOMEN'S BASKETBALL COACH STOLLINGS OVER ABUSE CLAIMS: Texas Tech fired women's basketball coach Marlene Stollings Thursday, one day after a USA Today report on claims of a culture of abuse in her program. Players have made claims of abuse over the past two years that she's been the coach, including being required to maintain a heart rate of at least 90 percent capacity during games, being subjected to demeaning and threatening comments, and being targeted by sexually suggestive behavior from a strength coach who has since resigned. More than half of the players, 12 of 21, left the program over the two years.

➤YELICH HITS INSIDE-THE-PARK HOME RUN IN BREWERS' 8-3 WIN OVER WHITE SOX: Milwaukee Brewers outfielder Christian Yelich hit an inside-the-park home run -- the first of his career -- in the Brewers' 8-3 win over the Chicago White Sox last night. Yelich was able to score the run in the fifth inning after a misplay by Chicago left fielder Eloy Jimenez. The inside-the-park home run was the 30th in Brewers' franchise history.

➤NOTRE DAME WON'T PLAY NAVY FOR FIRST TIME IN MORE THAN 90 YEARS: The Atlantic Coast Conference released its football schedule yesterday for the upcoming coronavirus-affected season, which includes Notre Dame, as the school is giving up its independence for the season to play in the ACC. The schedule shows that Notre Dame will open its season against Duke on September 12th, and won't play Navy for the first time in more than nine decades.
Posted 4:11:00 AM