NEGOTIATIONS RESUME ON RELIEF PACKAGE: President Trump on Monday tweeted criticism of Dr. Deborah Birx, the coordinator of the White House coronavirus task force, after she'd warned on CNN Sunday that the virus is now, quote, "extraordinarily widespread" in the U.S. Earlier Sunday, House Speaker Nancy Pelosi had said she doesn't have confidence in Birx, and Trump in his tweet suggested Birx's comments were made in reaction to that criticism: "So Crazy Nancy Pelosi said horrible things about Dr. Deborah Birx, going after her because she was too positive on the very good job we are doing on combating the China Virus, including Vaccines & Therapeutics. In order to counter Nancy, Deborah took the bait & hit us. Pathetic!" 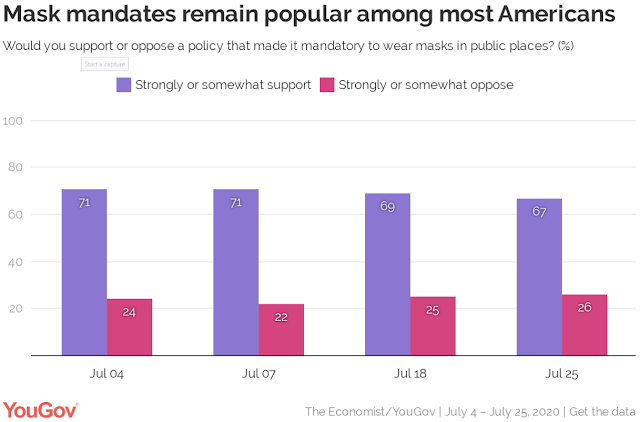 Meanwhile, negotiations resumed Monday on a new coronavirus relief package, but progress was slow, with House Democrats, Senate Republicans and the White House still divided on some proposed measures, including on extending the $600 weekly additional unemployment benefit during the pandemic. Things everyone agrees on include another $1,200 stimulus payment to Americans and changes to the Paycheck Protection Program to allow hard-hit businesses to get another loan under it. But Speaker Nancy Pelosi continues to push for aid to state and local governments put in a big financial hole by the coronavirus, while Senate Majority Leader Mitch McConnell is insisting on liability from coronavirus-related lawsuits by workers, students and others for businesses, universities and charities.

There have been more than 155,400 deaths as of early this morning, according to Johns Hopkins University's count, and more than 4,713,000 confirmed cases.

➤ISAIAS MAKES NORTH CAROLINA LANDFALL AFTER BEING UPGRADED TO HURRICANE: Hurricane Isaias [ees-ah-EE-ahs] made landfall near Ocean Isle Beach, North Carolina, just after 11 p.m. last night after having been upgraded from a tropical storm to a Category 1 hurricane, with sustained winds of 85 miles per hour. The U.S. National Hurricane Center warned people living on the coast of a possible storm surge of up to five feet, and of up to eight inches of rain, with the possibility of flash floods. The fast-moving storm will be heading up the East Coast, with Tropical Storm watches and warnings posted all the way up to Maine. 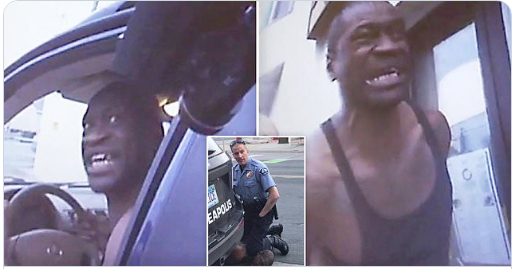 Footage from the body cameras of Thomas Lane and J. Alexander Keung was filed by Lane's attorney in support of his motion to dismiss the case against the former officer. The judge in the case refused to allow news organizations to publish the footage, making it available only for limited in-person viewing at the court. The video posted by the Daily Mail shows, in part, a panicked Floyd struggling with the officers in the back of a squad car, and Lane asking Officer Derek Chauvin, who's charged with murder after kneeling on Floyd's neck for nearly nine minutes, whether Floyd should be rolled on his side. Benjamin Crump, an attorney for Floyd's family, said yesterday that the video shows Floyd didn't pose a threat, stating, "The police officers approached him with guns drawn, simply because he was a Black man. As this video shows, he never posed any threat." Police were responding to a call about a man using a counterfeit $20 bill.

➤PROSECUTOR TRYING TO GET TRUMP'S TAX RECORDS CITES REPORTS OF TRUMP ORG.'S 'EXTENSIVE AND PROTRACTED CRIMINAL CONDUCT': The New York City prosecutor who's trying to get President Trump's tax records told a judge yesterday that he's justified in seeking them because of public reports of, quote, "extensive and protracted criminal conduct at the Trump Organization." Manhattan District Attorney Cy Vance hasn't disclosed much of why he's requested eight years of Trump's personal and corporate tax records other than being related to the investigation into payoffs to two women before the 2016 election for them to keep quiet about their alleged affairs with Trump. But yesterday's court filing revealed more, saying it's for a, quote, "complex financial investigation," and noted the public allegations of possible criminal activity at the Trump Organization dating back more than a decade. After the Supreme Court last month rejected Trump's argument that he couldn't be criminally investigated while president, his legal team argued that the subpoena for his tax information was issued in bad faith and amounted to harassment.

➤HOUSE COMMITTEE CALLS NEW POSTAL HEAD TO TESTIFY ABOUT CHANGES CAUSING MAIL DELAYS ACROSS THE COUNTRY: The House Oversight Committee yesterday called for new Postmaster General Louis DeJoy to appear before them at a hearing next month to testify about operational changes that have been made at the U.S. Postal Service that are causing delays in mail delivery across the country. DeJoy, a Republican fundraiser who was appointed to his job in June, instituted changes that eliminated overtime for postal workers and ordered that mail be kept until the next day if postal distribution centers are running late.


Democratic Rep. Carolyn Maloney, who chairs the committee, said the hearing will focus on the necessity of on-time mail delivery during the pandemic and also for the November election, during which there's expected to be a big increase in the number of people voting by mail because of the pandemic. Trump has repeatedly blasted such an expansion of voting by mail, making unsupported claims that it will lead to widespread voter fraud. The president also said yesterday that the cash-strapped Postal Service would have a hard time handling the large increase in mail-in ballots, stating, "I don’t think the post office is prepared for a thing like this."

➤TRUMP THREATENS LAWSUIT AFTER NEVADA PASSES MEASURE TO MAIL BALLOTS TO ALL VOTERS: President Trump threatened a lawsuit yesterday after Nevada Democratic Governor Steve Sisolak signed legislation passed by the state Legislature under which all of the state's active voters will be mailed ballots ahead of the November election. Sisolak said, "This bill will enable election officials to continue to support the safest, most accessible election possible under these unprecedented circumstances." Seven states now plan to automatically send voters ballots amid the coronavirus pandemic. Trump has repeatedly made unsupported claims that mail-in voting will lead to widespread voter fraud. Republicans are particularly unhappy with provisions of Nevada's new law that expands who is allowed to collect ballots from voters and hand them in.

➤TRUMP SAYS FEDERAL GOV'T. SHOULD GET A CUT IF MICROSOFT BUYS TIKTOK: President Trump said Monday that he'll allow a U.S. company to buy Chinese-owned TikTok, which Microsoft is in talks to do, setting a deadline of September 15th for TikTok to find an American buyer. After that, he said he'll follow through with his threat to shut down the popular video app in the U.S. because of security concerns. However Trump also said that if TikTok is bought by an American company, the U.S. Treasury should get a cut of the money in a, quote, "substantial amount." Trump said, "Right now they don't have any rights unless we give it to them. So if we're going to give them the rights, then . . . it has to come into this country." When asked whether the money he says should go to the U.S. Treasury should come from Microsoft or from TikTok's Chinese parent company ByteDance, Trump said the U.S. should get a significant amount, quote, "either way" because the government made the deal possible. Legal experts were dubious that there's any legal basis for such a demand.

➤CARDINALS-TIGERS SERIES POSTPONED AFTER 13 CARDINALS CORONAVIRUS CASES: The four-game series between the St. Louis Cardinals and the Detroit Tigers that was supposed to start today in Detroit has been postponed after seven Cardinals players and six staffers tested positive for the coronavirus. St. Louis general manager John Mozeliak said five of them are asymptomatic, and the others have so far had a variety of minor symptoms that didn't require hospitalization. The Cardinals have been in quarantine since Thursday, when their series with the Milwaukee Brewers was also postponed due to positive tests.

➤AS MARLINS SET TO RETURN, CEO JETER SAYS OUTBREAK DUE TO 'FALSE SENSE OF SECURITY': The Miami Marlins are set to return today (August 4th) after having their games postponed for more than a week due to a coronavirus outbreak on the team in which at least 18 players tested positive. Marlins CEO Derek Jeter said yesterday that a "false sense of security" was to blame that led the team to ease up on wearing masks and social distancing, saying, "The entire traveling party got a little too comfortable." The Philadelphia Phillies, who also had a week of games postponed because they'd last played the Marlins, returned yesterday.

➤BIG 12 TEAMS TO PLAY NINE CONFERENCE GAMES, ONE NON-CONFERENCE: Big 12 schools agreed last night to a 10-game football schedule this coronavirus-affected season in which teams will play nine conference games and one non-conference game. The conference said they'll like start playing in mid-to-late September, but didn't give a specific day.

MLB at Field of Dreams is becoming a reality.

➤'FIELD OF DREAMS' MLB GAME POSTPONED: MLB's "Field of Dreams" game that was set to be played in Iowa on August 13th has been postponed until next season because of the coronavirus pandemic. The Chicago White Sox were originally going to host the New York Yankees at the new ballpark on the cornfield next to the site of the 1989 Field of Dreams movie in Dyersville. However, Chicago's opponent was changed to the St. Louis Cardinals when the schedule for the coronavirus-shortened season was put together. Now that it's been pushed to next year, the White Sox will still be one of the teams when the game is played, but their opponent hasn't yet been determined.
Posted 4:07:00 AM