Moss was half of ‘The Brad and Tara Morning Show’ on KFTZ Z103 for nearly 18 years.

Brad Barlow, her co-host, posted about his friend’s death on Facebook Sunday afternoon. 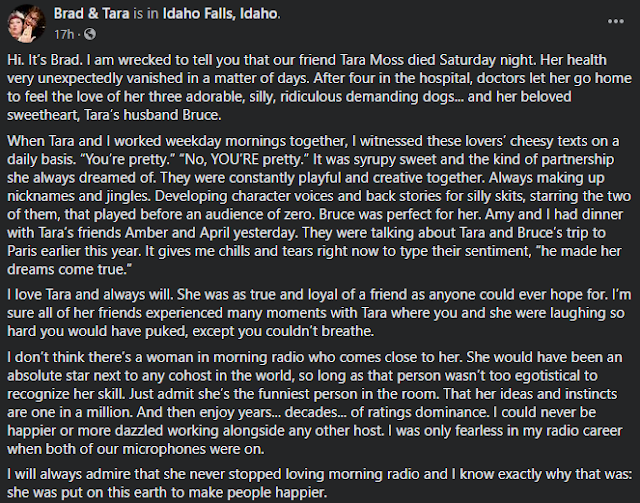 Barlow and Moss began their on-air partnership in 2000. Later on, Moss spent a year or two working at a station in Boise where Barlow eventually followed. The duo later came back to work at Z103, where they remained until Barlow retired in June 2018.

“There was no show like ours. I’m not bragging (when I say that),” Barlow tells EastIdahoNews.com. “What made our show so great was that it was like you were at a restaurant and the people at the table next to you were having an interesting conversation that you couldn’t help but listen to.”

Barlow says they had a natural on-air chemistry that complemented each other’s roles.


EastIdNews · Remembering Tara from 'The Brad and Tara Morning Show'

“I don’t think we were yin and yang,” Barlow explains. “We both loved each other so much and we loved making people laugh and entertaining people…and just loved to shine together.”

Barlow says Moss was “the more magical piece of the puzzle” and could have been as great as she was with any other talent.

“If you knew Tara from listening to the radio, you knew the real Tara,” he says.

Moss left Z103 in 2019 and spent the last year working as a tour guide at the Eastern Idaho Visitor Information Center.
Posted 10:10:00 AM