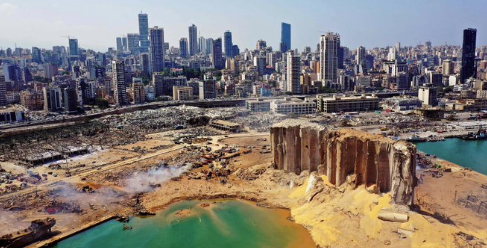 Investigators looking into Tuesday's  massive explosion at Beirut, Lebanon's port that killed at least 135 people and injured some 5,000 others are eyeing possible negligence in the storage of highly explosive ammonium nitrate in a warehouse. There were 2,750 tons of the chemical, which is used in fertilizers, stored at the port since being confiscated from a ship in 2013. It's believed to have exploded after a fire broke out nearby.


The government has also ordered the house arrest of several port officials. In addition to the deaths, Beirut Governor Marwan Abboud said that nearly 300,000 people are now homeless after their residences were destroyed in the blast, and financial losses from the explosion are estimated at $10 to $15 billion.

➤NEARLY 1,400 CORONAVIRUS DEATHS YESTERDAY; NYC SETTING UP CHECKPOINTS TO HELP ENFORCE TRAVEL QUARANTINE: The U.S. recorded nearly 1,400 coronavirus deaths on Wednesday, the 1,388 reported fatalities adding to the total count of more than 158,200 as of early this morning, according to Johns Hopkins University's count. The total number of confirmed cases is now more than 4,823,000, with another 52,810 added yesterday. Even with the high number of daily cases and fatalities, AP reports that the number of people getting tested is falling, down 3.6 percent over the past two weeks. Officials largely blame the decline on people getting discouraged with having to wait hours to take a test and days or even weeks to get the results.

New York City Mayor Bill de Blasio announced yesterday that checkpoints are being set up at entry points to the city, such as bridges and train stations, to help enforce the 14-day quarantine on travelers from 35 states and territories that have an elevated rate of spread of the coronavirus. At the checkpoints, travelers from the affected areas will be told they must quarantine for 14 days, and be given a health form to complete so that contact tracers can follow up and make sure they are quarantining. The checkpoints will be set up at different entry points each day, and New York City Sheriff Joseph Fucito, whose deputies will staff the stations, said there will be a "random element," with, for instance, every sixth or eighth car on a bridge possibly checked.


Negotiations between Senate Democrats and the White House on a coronavirus relief package continued for yet another day yesterday, with little apparent progress. White House Chief of Staff Mark Meadows threatened after the day's talks, as has President Trump, that Trump is looking at options to use his executive authority to act on his own to extend a partial ban on evictions and act on unemployment benefits. On two of the key areas of dispute, House Speaker Nancy Pelosi is standing by wanting to extend the $600 a week extra unemployment benefit that has just expired, while Republicans are now offering to cut it to $400, according to Politico; and while the White House has offered $150 billion to help state and local governments that were plunged into a financial hole because of the coronavirus, Pelosi wants a much higher figure of closer to $1 trillion, and several key Senate Republicans also want more money for state and local governments.

➤TRUMP'S CAMPAIGN, RNC SUE NEVADA OVER NEW VOTING-BY-MAIL LAW: President Trump's re-election campaign and the Republican National Committee have filed a lawsuit against Nevada's top elections official over a new law that will automatically send a ballot for November's election to all active registered voters. The lawsuit alleges the law would make, quote, "voter fraud and other ineligible voting inevitable." It seeks an injunction to prevent the law from being implemented and enforced. Trump has for months been railing against efforts to expand mail-in voting amid the coronavirus pandemic, making unsupported claims that it would lead to widespread voter fraud. However, Trump reversed that stance on Tuesday for Florida, tweeting to encourage voting by mail in the critical swing state, contending its election system is, quote, "Safe and Secure, Tried and True." 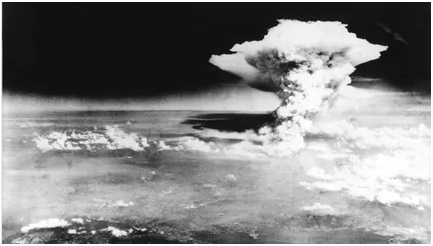 ➤SURVIVORS MARK 75TH ANNIVERSARY OF HIROSHIMA ATOMIC BOMBING: Survivors of the world’s first atomic bombing in Hiroshima, Japan, gathered Thursday to mark the 75th anniversary of the World War Two attack by the U.S. There were a significantly smaller number of people than usual despite the landmark anniversary because of the coronavirus pandemic. As part of the ceremony at Hiroshima's Peace Memorial Park, a moment of silence was held at 8:15 a.m. local time, the time when the bombing took place. There were 140,000 people killed in the Hiroshima bombing, and another 70,000 killed when the U.S. dropped a second atomic bomb three days later on Nagasaki. Japan surrendered days later on August 15th, ending World War Two.


➤MLB MANDATES TOUGHER CORONAVIRUS PROTOCOLS: MLB is mandating tougher coronavirus protocols after outbreaks among players on the Miami Marlins and the St. Louis Cardinals that led to the postponement of 21 games in the first two weeks of the shortened season. A memo was sent to teams yesterday outlining the changes, including that players and staff must wear face masks at all times, including in the dugout and bullpens, except for players on the field. Among others, players and staff are banned from visiting bars, lounges, malls or other places where groups of people congregate while in their home cities, and teams must limit the size of traveling parties to essential personnel.


➤NO NBA PLAYERS POSITIVE IN LATEST TEST RESULTS: Having the NBA play in a "bubble" is continuing to be successful, with no players positive for the coronavirus in the latest test results released by the league yesterday, the first since July 29th. In addition to playing and living in the bubble at Walt Disney World, everyone must fill out a questionnaire on their phones each morning and measure their temperature and blood oxygen level. Face mask use is required, as is observing social distancing.

➤BIG TEN TO PLAY CONFERENCE-ONLY GAMES: Big Ten football teams will play 10 conference-only games, according to the schedule released yesterday by them, the last of the Power Five conferences to announce its coronavirus-affected schedule. Games will begin as early as the weekend of September 5th, but the conference warned it's still not certain that games will even be played.

➤NO FALL CHAMPIONSHIPS FOR HUNDREDS OF DIVISION II AND III SCHOOLS: There will be no fall championships for hundreds of colleges and universities this year after NCAA Division II and Division II officials canceled their fall postseasons yesterday due to the coronavirus pandemic. That came after the NCAA's governing board said earlier in the day that each division would be able to make its own decision. Division I officials, who have yet to make a decision about their fall championships, now have two weeks to do so.
Posted 4:11:00 AM