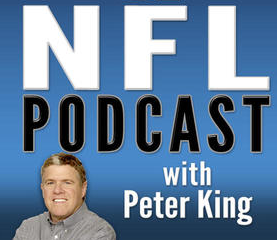 Time Inc. announced Wednesday, at the IAB Podcast Upfront event, that it will launch new podcasts in 2016 and 2017 across its brand portfolio. During the presentation, Time Inc. revealed that the company reaches 3 in 4 adults who have listened to a podcast and that 85% of Time Inc.’s consumers have downloaded a podcast [Source: MRI comScore Multiplatform Fusion, June 2016, Fall 2015].

“Audio is a meaningful part of Time Inc.’s ‘Content Everywhere’ strategy as we harness the collective power and scale of our brands to produce and distribute content on every platform. We are reaching our audiences whenever, wherever and however they want to consume content,” said Time Inc. Chief Content Officer Alan Murray.

The ultimate destination for all things pro football. Led by one of the most influential storytellers in all of sports media, three-time American Sportswriter of the Year Peter King, this podcast is an access-driven experience that brings fans into the locker room, the press box and the front office with the biggest influencers in professional football. Fans can listen in on in-depth conversations with the biggest names in football, who they haven’t heard before, to get a fresh, new and intimate experience with America’s most popular sport.
A fun, friendly conversation about the week in TV and streaming. Ray Rahman and Amy Wilkinson break down the hottest topics each week, giving listeners a little bit of everything—previews, analysis, debates and predictions.
Sometimes it doesn’t matter what really happened. It’s how we remember it. Join host Susanna Schrobsdorff for deeply personal and often hilarious conversations with authors—both famous and not— who’ve written about the most pivotal and intimate moments of their lives. How do you turn memories into stories? And how do the stories we tell about ourselves shape us? Nothing is out of bounds in these memoirs. We’ll talk marriage food, sex, success, race, crime, politics, kids and the arts.
Leigh Gallagher, co-chair of Fortune’s Most Powerful Women Summit, walks listeners through some of the most recent gatherings, sharing notable conversations and interviews.
A funny, celebratory and aspirational chat with pop culture stars about their paths to success—peppered with lessons on how they navigate hate, learn from missteps and stay focused and inspired.
Jeffrey Kluger takes his listeners on the most harrowing space missions of our time with vintage mission audio and broadcasts.
A one-of-a-kind combination of insight, information and attitude concerning all things football. Drawing from an unmatched collection of sources, The MMQB’s senior reporter dives deep with original angles and unapologetic takes on the week’s biggest headlines. Episodes feature an eclectic mix of interviews with big names from inside and outside the football world. It’s the rare podcast experience that satisfies the hardcore gridiron junkie while remaining accessible to the casual football fan. Subscribe to The MMQB Podcast with Albert Breer.
Charli Penn talks to real women about real issues in the black community to break through stereotypes and bring to light controversial or taboo topics that aren’t discussed openly.
Each of the first eight episodes of EW’s “Harry Potter” Podcast is dedicated to one film in the eight-part series. The hosts finish with two podcasts dedicated to Fantastic Beasts just in time for the film’s premiere.
Darren Franich and Sam Highfill provide an in-depth look at the award-winning TV series centered on life in Dillon, Texas, where high school football brings the community together.
A weekly conversation between millennial reporters Taylor Tepper and Alicia Adamczyk, and guests, about the financial issues that matter most to people in their 20s and 30s. Enlightening and entertaining, each episode will offer insights and smart, practical, advice to help listeners make the most of their money and improve their financial health.
Every Monday morning, this podcast brings unique, informed and immediate analysis from across a football Sunday. Co-hosts Andy Benoit and Gary Gramling have all the gridiron action covered: the headlines, forward-looking takes on the games’ consequences and those deep-dive explanations that cover not just the “what,” but the “how” and the “why.” This is NFL coverage in the spirit of Peter King’s renowned Monday Morning Quarterback column. In other words, you’ll finish each episode knowing more about football than you ever thought you could.
Posted 3:07:00 AM