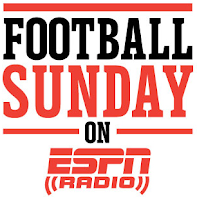 ESPN Radio will kick off the 2016 NFL season on Sunday, Sept. 11, with a doubleheader -- the New York Jets hosting the Cincinnati Bengals at noon ET, followed by the Detroit Lions at Indianapolis Colts at 4 p.m.

Commentator Marc Kestecher, analyst Shaun O’Hara and reporter Dave Shore will call the early game, with Adam Amin, Bill Polian and Ian Fitzsimmons teaming to describe the action in the second game. The two games are part of a nine-game early season schedule on ESPN Radio that will include four doubleheaders. Additional games in the schedule will be announced at a later date.

McNabb joins ESPN Radio having played thirteen seasons as an NFL quarterback for three different teams – the Philadelphia Eagles, Washington Redskins and Minnesota Vikings. Drafted second overall by the Eagles in the 1999 NFL Draft, McNabb was named to six Pro Bowls during his extensive career, and garnered an NFC Offensive Player of the Year honor as well as the NFC Player of the Year accolade in 2004. That same year, he led the Eagles to Super Bowl XXXIX. He has previously worked as a television game analyst for the NFL Network and Fox Sports, as well as a studio analyst for FS1.

Custer has served as a boxing host and commentator as the main host of Showtime Championship Boxing on Showtime Networks and also calls boxing play-by-play for Fox Sports/FS1 and CBS Sports. Custer calls play-by-play on college basketball for both sports networks. He recently added hosting duties on CBS Sports Network's College Basketball shows. He previously was a host for SNY-TV, from 2006-2016, during which he won multiple Sports Emmys.

Also, beginning Monday, Sept. 12, Mike & Mike will offer a daily lineup of veteran football voices, with Baltimore Ravens wide receiver Steve Smith Sr. joining the show several times during the NFL season and making his debut on a date to be determined. Each weekday, no fewer than three analysts will join hosts Mike Greenberg and Mike Golic to discuss and analyze the 2016 NFL and college football seasons. Full Release: http://es.pn/2aZNoHK